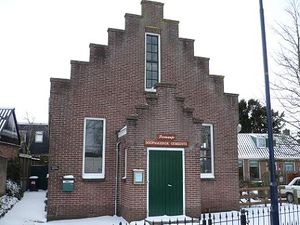 Stiens, a village in the Dutch province of Friesland, formerly the seat of a Mennonite congregation, which also was known as the Stiens and Hijum congregation. In 1635 this congregation numbered about 35 baptized members, most of whom, how­ever, lived at Hijum. These Mennonites of Hijum joined the Hallum congregation in the 18th century or even earlier. Then the Stiens congregation, which always was small and which never had a meetinghouse and no preacher after 1704, died out about 1725. Elder Leenaert Bouwens baptized one person at Stiens about 1552. Since 1 November 1951, there has been a Mennonite circle (Kring) at Stiens, to which 20 Mennonites belong; they hold their meetings every two weeks. The pastors of the neighboring congregations of Oudebildtzijl and Hallum take care of the Stiens circle.

In 1974 the church moved into a building formerly used by a Hervormde Evangelisatie (Reformed Evangelical) congregation when it was constructed in 1924 until 1970. The building was leased for a number of years until it was purchased in 1996.