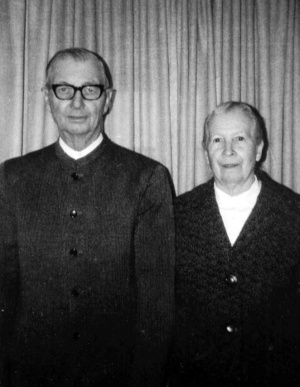 John Benjamin Stauffer: minister and bishop of the Salem Mennonite Church near Tofield, Alberta, was born near Milford, Nebraska, on 24 July 1889, and died at Viking, Alberta on 26 July 1983. He married Lydia Maude Roth, daughter of Bishop Nicholas E. Roth, on 26 April 1914. They were the parents of seven children.

The family of John B. Stauffer's grandfather, Joseph Stauffer, had migrated from France to Illinois in 1866. They moved in 1878 to Milford, Nebraska, where they attended the East Fairview Amish Mennonite Church in Seward County, but subsequently moved to Fillmore County. In 1911 the family migrated to the Tofield district of Alberta, settling on a farm 2.5 km north of Dodds. While other family members rode in railway passenger cars, John arrived on a freight train, accompanying the settlers' goods on the long and circuitous rail trip from Nebraska.

John Stauffer became an active member of the Salem Mennonite Church, serving in various capacities, including that of Sunday School Superintendent, for many years. On 9 May 1935, following the death of John K. Lehman, he was chosen, by lot, and ordained as a minister in the congregation. He was chosen, by lot, to succeed his father-in-law, Nicholas E. Roth, as bishop in 1939.

He retired from the ministry in 1962 at the age of 73. He and his wife then went into Voluntary Service at La Juanta, Colorado for about two years. His later years were spent visiting senior citizens, hospitals and mission workers in the north as long as he was able to drive his car. After his wife's death in 1971 he resided alone in their small retirement home on the home farm yard until the spring when he moved to the Vialta Lodge at Viking, Alberta.

Historical Sketch and Obituary card made available by Paul Voegtlin.

Round Hill & District. Salute the Pioneers - copy is available at the Glenbow-Alberta Institute.