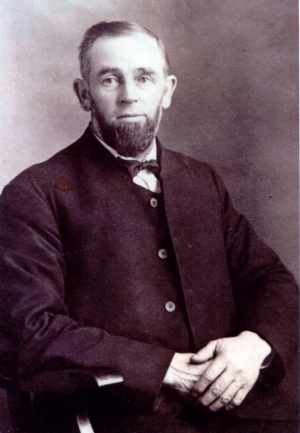 Israel Shantz was converted at revival meetings near Berlin (Kitchener), Ontario in 1891. He served for nine years as superintendent of a new Sunday School near Waterloo, Ontario, before moving with his family to the Carstairs district in 1901. He and his wife participated in the organization of the West Zion Mennonite Church; later, on 15 September 1901, he was chosen by lot and ordained as minister of the new congregation. He was ordained as bishop 3 October 1909 and served in that office until his death in 1910, traveling extensively as an evangelist and visiting Mennonites who had settled in scattered small clusters in various districts of Alberta and Saskatchewan. He maintained an exceptionally strong and abiding interest in the work of the Sunday School.

Shortly after his arrival at Carstairs, Israel Shantz suffered a serious leg injury while unloading lumber which had been shipped to the community by rail. The injury never completely healed, causing him considerable discomfort, particularly when traveling. While on a trip to visit settlers arriving in the Tofield district, he suffered a fall which aggravated his leg injury. Infection set in and he returned home a sick man. There were further complications, and he died at his home in Carstairs at the relatively young age of 47. His funeral was reportedly the largest held in that community up to that time, and gave expression to the far-reaching influence he had exerted during the time of his ministry.

Shantz's influence extended far beyond his home community. He was, from the time it was created in 1903, an influential leader in the Alberta Mennonite Conference, which later became the Alberta-Saskatchewan Mennonite Conference and is now the Northwest Mennonite Conference. He offered help and practical spiritual advice to many Mennonite settlers. As a faithful follower of Jesus, he sought to apply the teachings of the Jesus to the opportunities and problems of everyday life. The impact of his life was remembered with affection by members of the congregation at the 2001 centennial celebrations.