Selbstschutz (Self-Defense) was a measure taken in some of the Mennonite settlements of Russia during the Revolution and Civil War in 1918-1920. The Bolshevik Revolution in October 1917 gradually spread and reached toward the Mennonite settlements, but the major Mennonite settlements of the Ukraine were occupied by the German army between April and November 1918. When it withdrew, since the new Soviet government had not yet established itself in this area, various temporary forms of government came into being, including the group of followers of Nestor Makhno. They were anarchist in their outlook and set out to destroy any order and to punish those who possessed property. The settlements of Molotschna, Chortitza, Borozenko, and Zagradovka suffered untold hardships from them. The male population of a number of villages was completely annihilated and the food and property were taken. A total of some 600 people were murdered. Old and young women were raped, and consequently venereal diseases spread in the communities. Typhoid fever and other contagious diseases were also brought in. Before the German occupation army withdrew, it had drilled some Selbstschutz units and left weapons and ammunition in some communities. This was prior to the Makhno incursions. In some instances the trained young men took up arms to defend their families and their property against the anarchistic bandits when they came, which in turn provoked the bandits to renewed attacks.

The question as to whether it was permissible or even the duty of the young men to defend their families against the bandits caused many discussions and tested the centuries-old principle of nonresistance. Most of the leaders and the majority of the Mennonite population did not support such views. Nevertheless, particularly among the younger generation quite a number felt that in this case it was their duty to take up arms in self-defense. 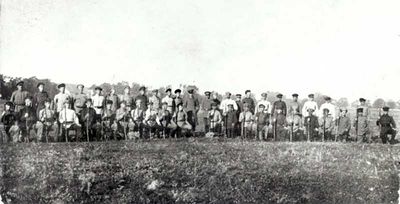 It is likely that the Molotschna Mennonites were the first to be attacked by the Makhno anarchist hordes. Some German officers remained in the Molotschna to lead the Selbstschutz which they had drilled and equipped. One of the significant battles between the Makhno group and the Selbstschutz took place twenty miles (35 km) north of Halbstadt near the Catholic village of Blumental early in March 1919. After a fierce five-day battle, the Selbstschutz unit was overwhelmed by the Makhno group which outnumbered them ten to one. Gradually they withdrew to Halbstadt. On March 9 and 10, hundreds of wagons of German refugees (Mennonite, Catholic, and Lutheran) moved toward the Crimea. The regular Red army regiments soon moved in and prevented the Makhno bandits from occupying the Mennonite villages, and the Makhno followers then subjected themselves to them from March to July 1919. During this time the Mennonites suffered very severely.

A similar fate overtook the Mennonites of the Chortitza settlement and the surrounding villages. Between July and September 1919 the White army under Denikin occupied this territory, fighting for the restoration of the old regime. Mennonites who had already experienced the unpredictable situation during the Revolution and had been molested by the Russian peasantry showed their sympathies toward the Denikin army as they had done before with respect to the German occupation army. Some young men were now drafted into the Denikin army. Late in September the Makhno bandits moved into the Chortitza settlement, killing hundreds of people and destroying property and burning houses, particularly the families and homes of those where a member had joined the Denikin army. A most vivid description of the tribulations of the Chortitza settlement is given by the report of the eyewitness, Dietrich Neufeld, in Ein Tagebuch aus dem Reiche des Totentanzes (in English, Russian Dance of Death). According to Karl Stumpp a total of 245 individuals were murdered in the Chortitza settlement in 1919. The Chortitza Selbstschutz was set up at the end of 1918 with Jacob Niebuhr and Jacob Martin Dueck as leaders. It was to include all males 20-35 years of age.

A nearby Chortitza daughter settlement, Nikolaipol (Nikolaifeld), also suffered immeasurably. The village Dubovka (Eichenfeld) lost its male population and four women, a total of 85 persons during one night. As in other cases, the population had shown preference to an orderly government. After the occupation by the German and the Denikin armies, some had joined the Selbstschutz. All this, however, does not justify the measures taken by Makhno and his bandits, although it may have helped to provoke them. The Makhno raids were simply planless anarchistic behavior which expressed itself in these explosive ways under the slogan, "Anarchy is the mother of all order."

One of the settlements which suffered most severely during the Makhno period was Zagradovka. Here, too, some of the young men had been trained in the use of weapons during the German occupation and the withdrawing Germans left weapons and ammunition with the Mennonites, which was known to the surrounding Russian population. The next government was that of the Petlura bandits and the Bolsheviki, after which the White army of Denikin moved in. Property which had been taken from the Mennonites by the surrounding Russian population was restored during the occupation of the German army and now again by the White army. The fact that some of the Mennonite young men helped in returning the property was later counted against them. On 29 November 1919, the Makhno bandits also occupied the Zagradovka settlement. Horrors which the settlers experienced cannot be described. In one village they killed almost the total male population on 29 November. Neufeld reports that 214 people were killed here and six villages were destroyed by fire.

In some of the larger Mennonite settlements like Orenburg and Siberia similar Selbstschutz organizations came into being, although they were directed more against the uncontrollable native groups such as the Bashkirs. Examples of complete nonresistance in hours of immeasurable stress and trial were furnished by the Mennonite settlements of Terek and Central Asia. The majority of the Mennonites of all settlements did not approve of any measure of self-defense although they probably did not always clearly protest against its use. Jacob H. Janzen (later of Waterloo, Ont.) at the request of the Bundeskonferenz served as a chaplain for the Mennonite men serving in the White army. He was vigorously opposed to the Selbstschutz. The total number of the Selbstschutz members given by Ehrt as 2,000 seems rather high. The official leaders and conferences regretted this development and stated publicly that it was a "grave mistake." (See particularly the proceedings of the Allgemeine Mennonitische Kongress in Ohrloff, August 1917 and the records of Allgemeine Mennonitische Bundeskonferenz, Lichtenau, 1918.)

On the whole the Selbstschutz organization was a regrettable deviation from a cherished principle of the Mennonites. It was an illustration of the fact that a peacetime principle tested under unusual conditions will likely not find 100 per cent adherence. On the whole, however, it must not be overlooked that only a small percentage arose in self-defense, which was caused by immeasurable suffering. In view of this fact it is probably more surprising that not more of the Mennonites participated. Many of those who were in the Selbstschutz remained in Russia. Among those who joined the White army were the "62" who came to the United States via Constantinople.

Much has been written on the subject of "Makhno" and the "Selbstschutz" but primarily as an outburst caused by a mortal wound. No scholarly inquiry has been made into the causes of the attack on the Mennonites, the relationship of this attack to the Selbstschutz, and the factors which led to the organization of the Selbstschutz and the opposition to it. -- Cornelius Krahn

The Selbstschutz (self-defense) began as a spontaneous movement by the Mennonites in the Ukraine to protect lives and property during the period of violent anarchy following the Russian Revolution. During the German occupation (April-November, 1918), hitherto secret Selbstschutz units were trained openly under German supervision mainly in Molotschna, Chortitza, Nikolaipol, and Zagradovka. If and when the German troops withdrew, these militia units were to become operative.

The Molotschna Selbstschutz proved to be the only one of any military significance. As the largest and wealthiest Mennonite colony, Molotschna had the most to lose from terrorist depredations. Fear of imminent disaster grew as local acts of looting and murder multiplied and refugees from nearby Schönfeld-Brazol reported harrowing experiences. The more militant Mennonites were further influenced by the glamorous presence of German troops and by the militancy of nearby non-Mennonite German colonists. They also welcomed the compromise resolution approved at the Lichtenau Allgemeine Mennonitische Bundeskonferenz (July 1918) which affirmed the ideal of nonresistance but refused to condemn Mennonites who took up arms. The centuries-old principle of nonresistance seemed suddenly irrelevant in a life-and-death crisis.

Aided and abetted by the White Army, the Molotschna Selbstschutz took the field with a successful attack against Makhnovite forces at Chernigovka (6 December 1918). During the winter of 1918-1919 the Selbstschutz, now an "army" of 2,700 infantry divided into 20 companies (of which 7 were non-Mennonite Germans from Prischib) and 300 cavalry, held a thinly-stretched "front" against Makhno's forces at Blumenthal, 20 mi. (33 km) north of Molotschna. In early March 1919, Makhno combined with the advancing Red Army to force the Selbstschutz to retreat and disband in Halbstadt.

What had begun as a police action ended, in the eyes of the Bolshevik government, as rebellious fighting against the Red Army. Having opted out of the political process four centuries earlier, the Mennonites had opted back in militarily and shown that " the logic of circumstances spoke more strongly than the logic of theology," according to one historian. In tragically provocative conditions and against the will of the majority, Mennonites had sacrificed the concept of the suffering church to the instinct for self-preservation. -- Al Reimer

Dick, Bernhard J. "Something About the Selbstschutz of the Nonresistant Mennonites in South Russia." trans. and ed. by Harry Loewen and Al Reimer. Journal of Mennonite Studies 4 (1986): 135-142.

Thielman, George G. "The Mennonite Selbstschutz in the Ukraine During the Revolution." The New Review: a Journal of East-European history 10 (March 1970): 50-60, weakened by factual errors and imprecise generalizations.

Unruh, B. H. Die Wehrlosigkeit. (an address delivered at the Allgemeine Mennonitische Konferenz on 7 June 1917).