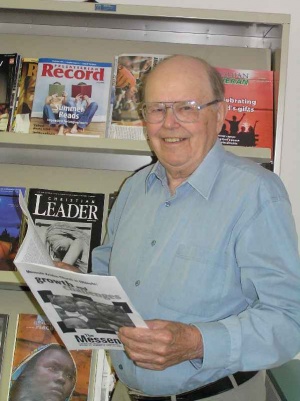 David married Helen Reimer in 1940. She accepted Christ at an early age and was baptized on confession of faith on 25 July 1937 in the Kleine Gemeinde congregation. She was hospitalized on 9 March 2002 and died from a leaking aortic aneurysm on 1 June 2002 at Bethesda Hospital in Steinbach, Manitoba.

David's status as a conscientious objector during World War Two was granted on 7 May 1943, and he served in 1943-1944 in Alternative Service as a truck driver in a lumber camp in north-central Saskatchewan. Reflecting sixty years later, he said he that if faced with the matter of going to war, he would again object.

Schellenberg graduated from Steinbach Bible Institute in 1949. A life-long learner, he returned part-time to graduate in 1985 with a Bachelor of Religious Studies degree from the then renamed Steinbach Bible College.

In the 1950s he served at the Mennonite Invalid Home (later called Rest Haven Nursing Home) in Steinbach, Manitoba, as an orderly and an administrator.

After the Western Gospel Mission (WGM) was formed in 1946, Schellenberg served as a worker and then became Field Man, an administrator responsible to visit WGM missionaries. He reduced his Field Man duties to half-time when he agreed to serve as a pastor in Portage la Prairie, Manitoba. From 1959-1965 he served as the pioneer pastor of (now) Portage Evangelical Church, an Evangelical Mennonite Conference (EMC) church.

It was his delight to place pictures of his children and grandchildren on the magazine’s cover. He retired in 1987, but said in 2001, "If I were still editor, I could start over with my great-grandchildren!"

In retirement David contributed two columns, "Pages from the Past" (focused on history) and "By the Way" (reflective on a range of topics); served as the local church reporter for Steinbach Evangelical Mennonite Church; and occasionally contributed an editorial or feature article.

Schellenberg displayed a keen interest in EMC and wider Anabaptist history. As a national staff person he helped to collect thousands of documents. He served on the EMC’s Archives Committee and as conference representative to the Mennonite Historical Society of Canada. He was later designated as the EMC's Archivist Emeritus.

D. K. Schellenberg papers are part of the collection at the EMC Archives.