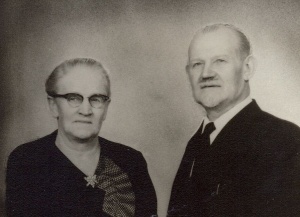 The Rempel family moved to Mariental in the Molotschna Mennonite Settlement when Nicolai was four. He attended Oberrealschule in Gnadenfeld until 1906 when his father died. As a result of his father’s death, Nicolai entered an apprenticeship in the retail business of Bernard Peters in Schoenfeld. On 20 July 1909 he married Katharina, Bernard Peters’ second eldest daughter. The next year they were both converted to a faith in Christ as their savior.

In 1910 he began his three-year compulsory Forestry Service (Forsteidienst). At the outset of World War I in 1914, he and his six brothers were inducted into the Russian Army as Red Cross Medics. He served in that capacity, caring for wounded soldiers while they were being transported back from the front to hospitals in Minsk, Smolensk, Moscow and St. Petersburg. He served on the same Red Cross train with his brother Hermann until the latter’s death of typhus in 1915. Hermann, who had been a teacher until the war, strongly influenced Nicolai’s religious faith.

The separation from his growing family during the seven years of service is archived in some 400 letters he and his wife wrote during those years and describe on a very human level the difficulties the young Mennonite medics and their families faced. As the war drew to the collapse of the Russian Monarchy in 1917, Rempel was part of a contingent of Mennonite Medics stationed in Moscow. These young men, weary of war and awakened to the coming threats to the former quiet life in the colonies, threatened a revolt to the leadership back in the colonies. One letter details this tension when leaders from the colonies met with the young men in Moscow, attempting to assuage the discontent. As is well known, difficult years of anarchy followed, bringing to the Mennonite colonies changes far in excess of what they could have imagined.

The Rempel family also encountered the ravages and horrors of civil war and famine that descended on them in the wake of those turbulent years till their exodus to Canada in 1925, yet Rempel says of that period, “We experienced the Lord's gracious protection and faithful provision.”  This says much about his faith in the face of the family losing two children from starvation, marauders entering their home at any hour to pillage and Rempel himself facing execution by a Machnovtsi brigand, only to be saved at the last moment by “an angel of God,” something he attested to till his dying hour, an ordeal precipitated by his position as Executive Secretary in Marienthal and the deception of a brother.

In 1923 Nicolai had been called to serve as a minister in the Mennonite Church. He willingly took on that Christian service and until his death, he had, “in all weakness been privileged to serve (his) Master in this task.” However, in July 1925 both he and his wife were baptized by immersion and were accepted in the Alexandertal Mennonite Brethren Church.

On September of that same year, 1925, they with their five children left the Soviet Union, immigrating to Canada, where they were received into the home of a young bachelor, Wilhelm Redekop, in Sunnyslope, Alberta. They helped him work his farm until 1928, when they purchased a farm in the Linden area and added five more children to the family.

N. A. Rempel was instrumental in establishing the Swalwell Evangelical Mennonite Brethren congregation at Swalwell, Alberta, serving as its minister from 1927 until May 1944.  Upon their relocation to a farm in East Chilliwack, Nicolai helped to establish the East Chilliwack Mennonite Brethren Church, where he served as the first leading minister from 1945 to 1946, and again from 1947 to 1948. He retired in 1952. Rempel worked with other Christian denominations, exchanging pulpits occasionally, was active in the Red Cross, helped members of Alcoholics Anonymous and tried to foster a healthy relationship with the larger community.

In addition to his role as minister, he served both communities, Linden and Chilliwack, as an osteopath (Knochenarzt -- bone-setter or chiropractor), a skill learned as a medic in the Red Cross Service in Russia. In 1940 he spent some months honing his skill at the Dirk Thiessen Osteopathic Clinic in Nebraska. Thus he worked both as a spiritual and physical healer in the communities, always guided by his faith in his God and servicing Him was his first priority.

Nicolai Abrahm Rempel was grateful to be able to immigrate to Canada and live in a land of peace and plenty -- a great contrast to the brothers he had left behind in the Soviet Union, three of whom were exiled to Siberia. Nicolai died in May 1956, six months after his dear wife. His was a life well lived in service to his God and his community.