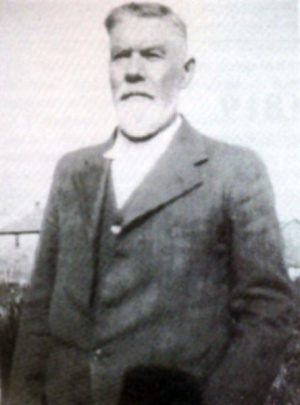 Heinrich R. Reimer: Mennonite minister, teacher, writer and farmer; born in Blumenort, Manitoba on 27 June 1876, just two years after his parents, Abraham R. Reimer (1841-1891) and Maria Reimer (1847-1916), emigrated from Russia to Canada. Heinrich was the sixth child from his father's second marriage. In 1896 Heinrich married Helene Dueck (1878-1950). They initially lived in Schwagershof, Manitoba, where they began farming and raising a family. Together Heinrich and Helene had 13 children, six daughters and seven sons. After several years it became apparent that Heinrich was "not a farmer at heart." He later wrote that as a result of drought and grasshoppers, "the Lord led me into the classroom," a career for which he proved well suited.

Heinrich R. Reimer began his 25-year teaching career in 1901. During that time he taught in Neuanlage for four years, Blumenort for fifteen years and Prairie Rose for six years. As a teacher, Heinrich earned the respect of his community and in 1916 was appointed as deacon in the Kleine Gemeinde Church in Blumenort. Upon moving to Prairie Rose, Manitoba in 1918, Heinrich was elected to the ministry and became an important leader in the Prairie Rose Church. He served faithfully, officiating at weddings and funerals as well as preaching on the East Reserve circuit for the Kleine Gemeinde. This meant traveling and an increased farm workload for his wife and children. As a minister Heinrich was open to new ways of doing things and was one of the first Kleine Gemeinde ministers to preach without reading his sermons. Two of Heinrich's sons also became ministers in the Kleine Gemeinde Church, Ben D. Reimer and Frank D. Reimer.

Heinrich R. Reimer died in 1959 having spent a life-time contributing to intellectual and spiritual development and well-being of his community.