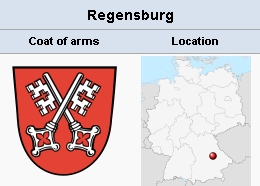 Regensburg, the capital (1952 population, 80,000; 130,080 in 2006) of the Oberpfalz, Bavaria, Germany, formerly an imperial city, was in the earliest time of the Reformation the seat of an Anabaptist congregation. It may have been founded in the fall of 1527 (by Ludwig Haetzer), when several persons were baptized. In that year several Anabaptist leaders stopped here enroute to other places—Oswald Glait, Hans Schlaffer, Wolfgang Brandhuber, and probably also Hans Hut. Hut is named in a warning about the Anabaptists sent to Regensburg by the Nürnberg City Council on 18 March 1527. At the end of the year the congregation was discovered by the authorities. Some of its members, mostly Austrian Anabaptists, including Leonhard Freisleben (see Eleutherobios), were imprisoned and cross-examined on 15 November then expelled from the city. A worse fate befell the Augsburg schoolteacher Augustin Würzlburger. He was captured on 21 May 1528 and executed on 10 October of that year; he is the only Anabaptist who died as a martyr in Regensburg.

Until 1534 there is no further mention of Anabaptists in the city. It was then reported that hundreds of Anabaptists were on their way to Linz or to Moravia by way of the Danube. Daily large numbers passed through the cities on the Danube. The cathedral preacher Laurentius Hochwarth boasted it was due to his preaching that Regensburg was saved from the fate of Münster. In a letter of 30 June 1534, Luther warned the city council about the Anabaptists. Scarcely a year later (11 June 1535) the council issued a severe mandate against them, and in 1537 took active steps. Several were banned from the city, but upon recantation readmitted. Nothing is heard of enforcing the imperial mandates. This may have led to an increase in the number of Anabaptists in the city. In 1539 the Council estimated their number at several hundred. Twenty persons were summoned before the court; most of them were expelled, but those who recanted remained in the city. This lenience evoked an ungracious letter from King Ferdinand demanding severe punishment for the Anabaptists. It was not heeded. Captured leaders were expelled from the city.

Slowly the movement receded. In the 16th century it is heard of only occasionally, and in the 17th not at all.

Since the beginning of the 19th century there has been a Mennonite congregation with Regensburg as its meeting place. It was formed by families from Alsace and Lorraine who leased the larger farms in the vicinity of Regensburg; most of the members are still farmers. The first preacher was Jakob Ackermann (1785-1841), who had a large farm in lease at Köfering near Regensburg. The congregation was reduced in size by immigration to America, and even more by the transfer of members to the Lutheran Church. It has at present (1957) a membership of 128 baptized members; the families are scattered over 33 villages. Meetings were held in rotation in the homes of the members until 1893, when they rented the use of the Bruderhaus church in Regensburg.  Services are held twice a month.

The Regensburg congregation formerly belonged to the Amish branch, but most of the distinguishing characteristics have been dropped, although footwashing was practiced until 1908. On 8 July 1908, some changes were made in the organization. The congregation decided to cooperate with those at Munich and Eichstock in engaging a minister; they chose Emanuel Landes (b. 1879 at Kradolf, Switzerland, now retired), who served at Munich and Eichstock 1905-54 and in Regensburg 1908-54. On the above date (1908) they joined the Vereinigung, and replaced the Waldeck Catechism and the Dordrecht Confession with the Christliches Lehrbüchlein, published by the Committee of Elders (see Aeltestenrat) of the Gemeindeverband. Since 1 January 1908, the congregation has kept a church record. Since 1955 lay ministers have again been serving the congregation. In 1957 they were Albert Schantz, Ludwig Krehbill, Ernst Horsch, and Heinrich Funck.