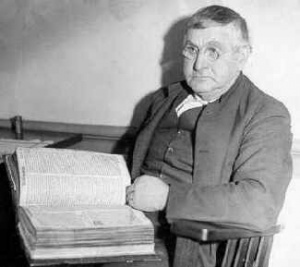 Thomas Reesor: a Mennonite immigration leader; born on a homestead in York County, Ontario as the fourth child of Christian Reesor and Esther (Hoover) Reesor on 18 March 1867. In 1891 he married Adeline, the daughter of Joseph and Diana Grove and together they had five children. Thomas Reesor died 20 March 1954.

Thomas was ordained to the ministry in 1916 and was an Old Order Mennonite of the Markham branch. He helped to organize the Non-Resistant Relief Organization of Ontario and assisted conscientious objectors in 1917-18. In 1924 he aided Russian immigrants in finding homes, and in 1925, employed by the Canadian Pacific Railway, he acquired land from the government for a settlement of Russian Mennonites in northern Ontario, west of Cochrane. This point, Reesor Station, flourished, growing to a population of 150 by 1935, but then deteriorated as the urban centers and frontiers expanded.