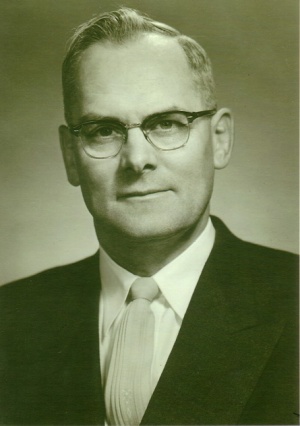 In 1923 young Abram Redekop arrived in Canada to begin a new and exciting life, first in Saskatchewan, then in British Columbia, followed by Manitoba, and finally Ontario. On 1 August 1920 he had been baptized and received into the Mennonite Brethren Church in Osterwick, Ukraine where he had also completed his education at the Zentralschule. Now in Canada his life took on new dimensions with his marriage to Katherine, followed by a rich family life with their four children. Abram continued his education in Canada at Winkler Bible School where he later served as instructor for nine years. Then, while his family remained in Winnipeg, he worked on a BA (BTh) degree at Great Lakes Christian College in Detroit, Michigan, graduating in 1945. Abram continued his teaching ministry, first at Great Lakes Christian College on a part-time basis, then at Eden Christian High School in Ontario and the Ontario Mennonite Brethren Bible School in Niagara-on-the-Lake, Ontario, where he also served as principal. At the same time he was active in preaching ministry in the churches of the Niagara and Ontario Mennonite Brethren community. In the late 1940s Abram served as assistant leader of the St. Catharines Mennonite Brethren Church.

Throughout his career, Abram Redekop was known for his winning and positive personality, his effective teaching of the Word, particularly at the Bible school level and for his stimulating preaching, Many of his sermons were punctuated with interesting illustrations and practical suggestions, factors which greatly enhanced their effectiveness amongst many welcoming congregations. Towards the end of his career as a Christian leader, he also worked hard at his family genealogy. His work resulted in a history of the Redekop family, available from his children.