Pustertal (Puster Valley; Italian, Val Pusteria), one of the most important routes of traffic in Tyrol (formerly Austria, now Italy), falls into two halves. One half, traversed from east to west by the Rienza River, has a number of villages extending from the Toblach plateau to the Mühlbach cove, which are frequently named in Anabaptist history, such as Welsberg, St. Lorenzen, Bruneck, Ehrenburg, Vintl, and Mühlbach. The other half, traversed by the Drave River from Tob­lach via Lienz, has Innichen, Sillian, Abfaltern, etc., though these enter the Anabaptist scene later than those in the half lying nearer the center of the movement. 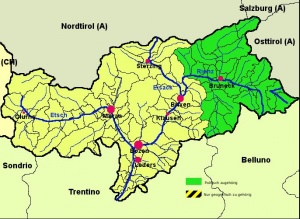 The Province of Bolzano-Bozen, with the Puster (Pusteria) Valley marked in green. Source: Wikipedia Commons

The Anabaptist movement entered the Pustertal in a southeasterly direction from Stertzing and in a northeasterly direction from Brixen. The first traces of the movement are found in the region of Welsberg, Bruneck, Toblach, and Michelsburg in April and May 1529. From the Michelsburg parish thirteen Anabaptists were taken to the court in Brixen in April of this year, four of whom were executed on 4 June, one of them being Gregor Weber, a preacher and the friend of Jakob Hutter.

Though the Pustertal has fewer blood witnesses than the Adige Valley and the Inntal, Michelsburg shows the considerable figure of twen­ty-four, Sillian two, Taufers one, Rodeneck four, and Schöneck four. But this list is incomplete, as the court records show. As early as 1529 Ana­baptists were brought to trial from Lienz and St. Lorenzen, among them Agnes, Jakob Hutter's sis­ter; Hutter had not yet come to public attention. Benedict, a former people's priest of Bruneck, was also seized. In the Schöneck jurisdiction Anabap­tists were arrested, taken to Brixen, and sentenced.

St. Lorenzen, near Bruneck, was Hutter's hometown; he, however, apparently first became acquainted with the Anabaptists in Klagenfurt. As their apostle he now made his first appear­ance in the Pustertal. He was the leader of the small group at Welsberg. Persecution began here in May 1529. Soon the Tyrolese Anabaptists—a large group from the Pustertal—were emigrating to Moravia. In Schöneck and Rodeneck the pris­ons were filled with Anabaptists in 1532. Also in Lienz the presence of Anabaptist leaders was sus­pected in 1533; in Sillian some were arrested and reported to Vintl.

The trial of Anton von Wolkenstein and his family falls into this period and this region. He belonged to one of the first families of the Tyrolean nobility and was closely associated with the Ana­baptists, and for a long time resisted the attempts of the Catholic clergy to convert him.

In the period just preceding and during Hutter's imprisonment the Anabaptist movement was extremely active throughout the Pustertal; later, though it still continued, it was no longer so successful. However, Anabaptists were arrested in Lüsen, Michelsburg, and Schöneck.

The attitude of the populace toward the Ana­baptists is shown by a letter written by the church councillors of Brixen to the authorities in Innsbruck on 17 June 1527, which states that in this persecu­tion the people could not be trusted. And it was still possible for members of the nobility to join the Anabaptists, as did Agnes von Waltenhofen, the widow of the clerk of Michelsburg, and her daughter. Since it was feared that others might follow their example, orders were issued in 1539 not only to apprehend her, but also to recruit men to "exterminate Anabaptist persons in the realm of Michelsburg, Schöneck, and Lüsen."

The vigorous steps taken by the authorities set a limit to the spread of the movement in the Puster­tal as elsewhere. In the next few years fewer Ana­baptists were brought to trial. The villages of Ehrenberg, Schöneck, Michelsburg, Uttenheim, and Heunfels still had Anabaptists, and as late as 1548 the Innsbruck authorities demanded of the governor (Stadthalter) and the councillors of Brixen that they restore order in the Pustertal. Some Anabap­tists were found in the villages in 1551 and 1554 and 1561. In 1569 it was reported that Anabaptism was becoming increasingly troublesome in the Pu­stertal. In 1580 the priest of Taufers reported to Brixen that several leaders of the Anabaptist sect were stirring up the people, and two years later large crowds were reported to be on their way to Moravia, a movement which lasted into the 1590's. In 1590 Georg Wenger was seized in St. Lorenzen and put to death on 5 August 1591, after a lengthy trial. On 19 June 1591, Jakob Platzer was arrested in Sillian and beheaded on 7 August of the same year. Not until the situation of the Hutterites in Moravia deteriorated did the migrations thither diminish; they ceased altogether when disaster struck the Moravian brotherhood in 1622. In the Pustertal there were still some Anabaptists in the early years of the 17th century—in Mühlbach, in the Rodeneck parish, in Bennfels, Sillian, Vintl, and Lüsen. After this the records contain no further evidence of the presence of Anabaptists in the Pu­stertal.