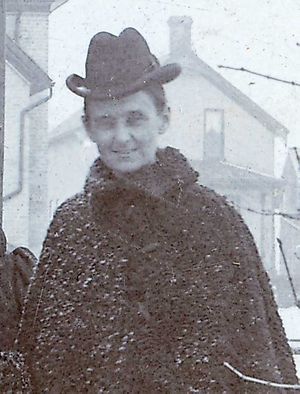 Sarah Pool was an evangelist and pastor of the Canada Conference of the Mennonite Brethren in Christ Church (MBiC). With her sister Euphemia (Pool) Guy (1859-1941), she contributed to the early years of the pentecostal movement in Ontario, Canada.

Sarah Pool, born on 21 November 1862, was the sixth of eight children of Scots John Pool (1803-1866) and Ann McGillivary Pool (17 October 1830-1 November 1918). John was from Annan and Ann from the Isle of Mull who met in Canada and married about 1849. Sarah grew up on the family farm south of Markham village in Markham Township, York County. The family were Presbyterian. Sarah Pool died just north of Markham on 25 October 1913 after a five-month illness. She was buried in the Pool family plot in St. Andrew's Presbyterian Cemetery, Markham.

The circumstances of Sarah Pool's conversion in 1887, her sanctification experience in 1889, and her adherence to the Mennonite Brethren in Christ in Markham are not clear. However, in 1888 her sister Euphemia was accepted as a probationer minister and married MBiC preacher Jesse Guy (probationer at Markham, 1887). In March 1894, Sarah Pool was accepted as a probationer minister and was assigned to pastoral work under her brother-in-law Jesse at Sherkston, Welland County. From 1895 to 1896 she was an evangelist in the Conference's tent evangelism ministry.

In October 1896, Sarah Pool went to the Christian and Missionary Alliance (C&MA) school then in New York City for training and was accepted for their China mission. A sailing date for March 1897 was postponed to December when her brother-in-law died in March. Sarah took a pastorate at the MBiC Dornoch mission in Grey County, until preparations resumed.

By January 1898, Sarah Pool studied the Chinese language in Wuhu, south east China until her posting to the Christian and Missionary Alliance mission station at T'siang-iang hsien in December. Around April 1899, Sarah's struggles with depression and culture shock induced the C&MA to send her home to Ontario to recover, which was greatly helped by deliverance experienced during an MBiC camp meeting in Toronto in October.

Sarah Pool was so far recovered that in March 1900 she returned to city mission pastoring and evangelistic work, starting at the East End Mission (Toronto) 1900-1901. She served as an evangelist 1901-1902, city mission worker (pastor) with partners at Owen Sound 1902-1903, St. Catharines 1903-1904, and Wiarton 1904-1905. Pool was again posted to the East End Mission 1905 to 1907 as a “slum worker”. Several years she reported making the most pastoral visits in the Conference, once reaching 1667 visits. From Toronto, she wrote, “It takes courage to enter some homes of sin that we find.... The deeper joy of seeing the backslider come back has been given to God's children in the mission lately, and others are seeking for forgiveness and holiness.”

Sarah Pool was already critical of some aspects of the MBiC's religious life when she encountered the pentecostal movement in Toronto at the Hebden mission on Queen Street East 1906-1907. In 1905 she had written, “The...Holy Spirit is often put down and rejected unthinkingly by some and ruthlessly by others. The world and backslidden church, who will not have him, tries [sic] to check his movings...”. She was asked to preach a sermon for the Annual Conference in March 1907 and used the occasion to criticize the MBiC Discipline's sanctification doctrine. A committee was appointed to interview Pool, and although at least one more article of hers was published in the Gospel Banner, and no suspension or resignation was recorded, that was the last official notice of her by the denomination.

In October 1908, the Canada Conference debated the teaching which the Presiding Elder Sam Goudie called the “new theology,” of baptism with the Holy Spirit with evidence of speaking in tongues. The Conference voted to recommend no change in the article on sanctification to the MBiC General Conference. Euphemia Guy, three other women preachers, and four male preachers resigned in protest. Sarah Pool and her sister helped form a three-stage Pentecostal congregation in Markham.

At Sarah Pool's death, the MBiC pastor in Markham, one of the 1907 committee, reported that Pool, “...passed away to her reward in the triumphs of a living faith. Services conducted in the home and at the M.B.C. church by Rev. Mr. Carson [probably B. F. Carson of the Holiness Movement Church] of Toronto assisted by a number of ministers of the different churches including the writer.”