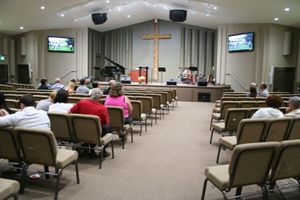 The sanctuary of Pansy Chapel prior to the dedication service (10 August 2014).
Photographer: Terry M. Smith.
Source: The Messenger.

Pansy Chapel, a member of the Evangelical Mennonite Conference (EMC), had its start between 1958 to 1960 as an outreach ministry of Blumenort Evangelical Mennonite Church in the rural area of Pansy, about 25 km. southwest of Steinbach, Manitoba. Leonard Barkman and Arnold Brandt began holding Sunday School in the Barkfield School; later adult classes were held. A chapel was built in 1961 and in 1962 Leonard and Betty Barkman, who had purchased a farm, became its self-supporting pastoral couple. Leonard Barkman was ordained in 1964; the congregation formally joined the EMC about this time. In the early years, teachers from the Blumenort EMC assisted the work, but this ended.

In 1978 the building was enlarged. By 1986 the worship service attendance was about 100. In 1986 Leonard and Betty Barkman were the pastoral couple; Dennis and Agatha Friesen, the assistant pastoral couple; and Jake and Margaret Penner, a deacon couple. In 1999 Ben Unger was interim pastor and served as pastor from 2000-2002. In 2003 Dennis Friesen served as assistant pastor. In 2004 Ed Giesbrecht, previously a youth leader, was youth pastor. During 2004-2006 Dennis Friesen was pastor and Leonard Barkman served as a minister. In 2009 Leonard Barkman was senior pastor, Ed Giesbrecht was youth pastor, and Dennis Friesen was a minister-at-large.

In 2014, Pansy Chapel added 371 square meters (4,000 square feet) to the building and on 10 August 2014 dedicated the space; at that event, it was said that Pastor Leonard and Betty Barkman had a 55-year history with the work at Pansy. In 2014 the Sunday morning attendance averaged 200 people. At that time there were three ministers, all partly self-supporting: senior pastor, Leonard and Betty Barkman; teaching pastor Dylan and Sheila Barkman; and youth pastor Ed and Sabrina Giesbrecht. Dylan Barkman is the son of Leonard and Betty Barkman.

Early on, John Dueck, a leader providing support from Blumenort, had counseled Leonard Barkman: "Don’t call it a Mennonite church." Pansy Chapel has consciously developed into a congregation of people coming from a range of cultural and church backgrounds.