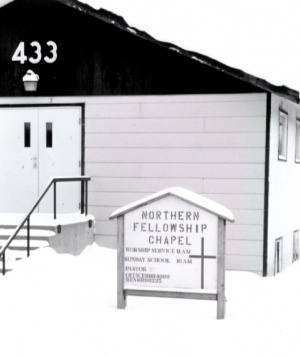 The Northern Fellowship Chapel (NFC) in Creighton, Saskatchewan, a member of the Evangelical Mennonite Conference (EMC), began services in 1960 because a schoolteacher, Henry Klassen, saw that the community needed an evangelical church. Services began in a community hall in Creighton in 1960 and a building was constructed in 1962 at 433 First Street West in Creighton. The congregation was formally organized on 1 November 1964 with 11 members. Since 1965 it has been affiliated with the EMC.

Its first worker was Arnold Wiebe in 1960. When Mel and Mary Koop arrived in November 1960 and Arnold Wiebe left unexpectedly, Mel Koop became the organizing pastor. With Creighton located between Denare Beach, Saskatchewan, and Flin Flon (both Saskatchewan and Manitoba ), many of the members came from the wider area. The congregation was known as Creighton Fellowship Chapel prior to 1964 when the name was changed to better reflect the membership. Its first baptisms were performed in May 1967 when George Braun was the pastor. Those baptized were Valerie Rempel, Bev Manns, and Robin Smith.

Northern Fellowship Chapel functions as a community evangelical church. In the 1970s and 1980s when churches in the area were affected by varying views on the Holy Spirit, NFC became charismatic. It grew significantly, but then went into decline.

In 2001 NFC began to share a pastoral team with Cornerstone Community Church (formerly Flin Flon Mennonite Brethren Church), a Mennonite Brethren congregation established in Flin Flon, Manitoba in 1984. Its joint pastoral couples have been Dale and Marge Warkentin (2001-2003), Alex and Carla Suderman (2003-2004), Scott and Natalie Koop (2004-2009), and Randall and Faith Krahn (2010-present). Retired pastoral couple Lorne and Margaret Moorhead, who served previously at Endeavour Fellowship Chapel and in Baptist circles (including in Flin Flon), are part of the local pastoral care team.