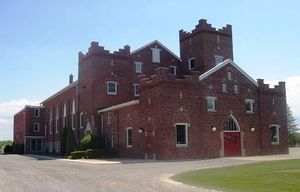 The Niagara United Mennonite Church had its roots in the Depression of the 1930s. Many Mennonite families who had difficulty sustaining themselves on the Prairies began to move to the Niagara Peninsula in Ontario. The area around Virgil began to be developed for fruit farming, particularly through the efforts of Mennonite land developer, Peter Wall.

The first Mennonite settlers in the community began to meet in homes, barns and local businesses. Since there were no local ministers, the meetings focused on Bible study and prayer, sometimes accompanied by reading a sermon of a well-known minister. Visiting ministers from Vineland sometimes led the services. Both Mennonite Brethren and General Conference Mennonites were part of these services.

The first informal organization of the United Mennonites in the Virgil area took place on 4 October 1936 when a church council and Sunday school teachers were elected. In fall 1937 the decision was made to build a church on Stone Road on land donated by John Suderman. The basement and shell of the main floor were completed in January 1938. The sanctuary was completed in 1940. On 25 January 1938 the group decided to apply for a charter under the name of Niagara Mennonite Church. A formal organizational meeting took place 1 February 1938 with 38 charter members. Peter Kroeker was elected as the leading minister. C. K. Neufeld joined him later in 1938.

Anti-German feeling before and during World War II led to suspicions of the Virgil-area Mennonites. In 1938 an unknown person tried to burn down the new church building, but the fire was extinguished with minor damage. In 1940 the police searched the church building looking for supplies of dynamite, arms and ammunition.

Continued growth due to continuing immigration to the area by Mennonite refugees from Europe and South America led to construction of a new red brick building which was dedicated on 11 December 1949. The former frame building was sold to the Niagara Boy Scouts which moved it into town. The immigration of German-speaking Mennonite immigrants continued for several decades.

Use of English in Sunday school and worship was considered beginning in 1959. For several years in the early 1960s there were separate German and English Sunday school classes, and consecutive German and English worship services. In 1965 about 170 persons left the congregation to help form the Bethany Mennonite Church which used English only. David Janzen, then the leading minister, helped to make this a congenial separation. Both English and German worship services at the Niagara United Mennonite Church have continued to 2017.

Church records at the church.

Location: 1 km northeast of Virgil on the south side of Niagara Stone Road

By Jacob A. Dyck. Copied by permission of Herald Press, Harrisonburg, Virginia, from Mennonite Encyclopedia, Vol. 3, p. 869. All rights reserved.

Niagara United Mennonite Church (General Conference Mennonite), located in Niagara-on-the-Lake, Ontario, had its beginning in 1934, when Mennonite settlers came to the Niagara district as fruit farmers. In the fall of 1937 they built a church two miles from Niagara-on-the-Lake. On 1 February 1938, at a meeting in the new church under the leadership of Peter Kroeker, the Niagara United Mennonite Church was organized. Because of the rapid growth in membership it became necessary to build a larger church in 1949. In 1956 the membership of the congregation was 540. Most of the members are fruit farmers. Since 1947 J. A. Dyck has been the minister in charge of this congregation.