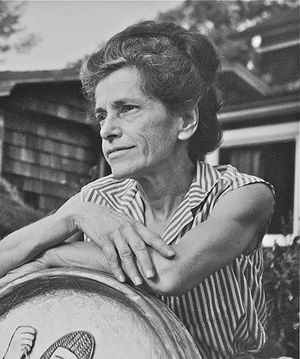 Kaethe "Kate" Neufeld: visual artist, was born 18 May 1905 in the prosperous town of Waldheim, Molotschna Colony, Ukraine. She was the oldest of four children of Heinrich lsaak Neufeld (13 June 1877-28 September 1920), a German-trained engineer and Waldheim factory owner, and Eliese Reimer (11 June 1884-18 April 1950), who came from Crimea, on the Black Sea. Kate grew up in happy and privileged circumstances until the outbreak of World War I, which marked for her the beginning of 10 years of hardship. Most tragic, in 1920, when she was 15, was her father's precipitous execution by agents of the communist regime.

In 1923 her widowed mother married a prominent Mennonite intellectual, Jacob Janzen, and soon the family felt political pressure to remove themselves from the Soviet Union. Kate emigrated with her now-enlarged Neufeld/Janzen family (they were 11 children in all) to Canada in December 1924.

Had the old Imperialist system under which Mennonites had once thrived in Russia persisted, and had Kate remained in her homeland, she would have developed a legitimate place in the Mennonite commonwealth in Russia — as an artist among the "cultural elite," the fairly sizable class of leading intelligentsia, wealthy industrialists, and prosperous landowners.

But her emigration to Canada re-defined the nature of her opportunities and the shape her life would take. In the bourgeois, middle-class immigrant world of south-western Ontario she found little opportunity to thrive as an artist. Indeed, for her co-religionists in Canada art was not "religious enough," she recalled, "not pious enough.... It was too worldly." 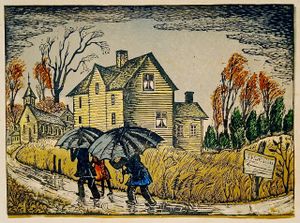 Outside the rigid cultural bounds of her Mennonite community — especially during the 1930s — Kate involved herself in the newly-established Art Society of Kitchener, with which she exhibited watercolors and black-and-white block-prints influenced not only by Ernst Kirchner and other German Expressionists, but also by the "Russian-Mennonite" block-print artist Dietrich Neufeld, a distant cousin who visited the Neufeld/Janzen family around 1930.

Kate moved briefly to Vancouver with her parents from 1935 to 1937. There, from Japanese-Canadian print-makers, she learned the technique of color block-printing, which in turn she taught her brother Woldemar, who would make the technique a central feature of his own successful career.

At the urging of her brother Woldemar, then just graduated from the Cleveland Art School, and with the support of her parents, she spent 2 1/2 years (1939-41) at the Cleveland Institute of Art. Her studies there were primarily part-time, pursued during evenings, while she maintained other day-time work. Her teachers included two of the leading American enamelists of the time: Kenneth Bates and Edward Winter.

Although in Cleveland she had begun specializing in painting and block-prints, she soon discovered enamels, and decided to take on the identity of "enamelist." She felt uncomfortable calling herself "artist." What she needed as enamelist, she remarked, was not a "studio," but a "workshop."

In the early 1940s, while exploring abstract forms, she created an audacious piece, 15" high and 21" wide, "After Picasso in Yarn." Picasso's international modernism did not ordinarily invite a response in embroidery, yet with this unconventional piece Kate Neufeld usurped expectations of what it meant to be an artist. The Cleveland Museum of Art was impressed enough by this work to include it in the "May Show," its prestigious annual juried exhibition.

In 1945 Kate moved with her brother Woldemar and his family from Cleveland to New York City, and in 1949 with them to New Preston, Connecticut, where one of her important early commissions — a large table inlaid with enameled tiles — came from the Fredric Marches. At New Preston, too, on the rural estate where she and her brother's family lived, Kate kept outstanding gardens of flowers and vegetables.

Over the course of her lifetime, she worked in various media: yarn, watercolor, oil, pastel, block-print, and monotype. But it was as enamelist that she felt most comfortable and made the greatest impact. For much of this work she drew inspiration from her own life, featuring images that made a significant impact on her — from the exquisite flowers and magnificent vegetables in the gardens she nurtured to religious images that remained in her memory from childhood, when she and her parents, riding in their carriages along highways during visits to friends and relatives, might pass by Russian peasant homes where flickering devotional candles both illumined icons and threw their light from windows.

Three of her enamels (most of which are heavily encoded with religious symbols derived from Russian Orthodox iconography, which she understood primarily in aesthetic rather than religious terms) were exhibited by the Vatican Pavilion at the 1964 New York World's Fair.

Her block-prints are represented in the permanent collection of the Library of Congress (Washington, D.C.). Her work is represented in various other museums as well: the Cleveland Art Museum; the Kresge Museum at Michigan State University; the New Britain Museum of American Art in Connecticut. Most of her work is held in private collections in the United States and Canada.

With the devoted assistance of her nephew Laurence Neufeld, Kate Neufeld continued to live and work in the Berkshires of Connecticut well into her old age. Predeceased by her artist/mentor younger brother Woldemar, she died in New Milford, Connecticut on 18 August 2004 at the age of 99.