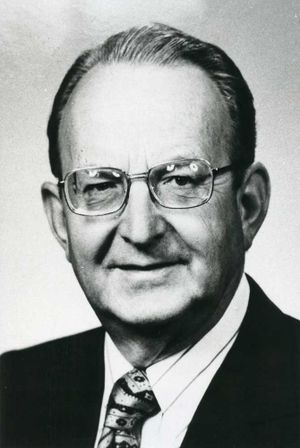 Herman Friedrich Neff: soldier, businessman, Self-Help Crafts director, was born 1 January 1922, the second of three sons of Hermann Neff (24 January 1891-15 January 1951), a doctor in Grünhain, Germany and Elisabeth Shantz (5 May 1893-17 August 1976). After coming to Canada in 1951, Herman met and married Isobel O'Krafka (5 December 1929–16 November 1996) on 4 July 1953. She was the third child of three sons and four daughters born to Otto Heinrich O'Krafka (13 November 1890-26 May 1964) and Lillian Hannah Shepherd O'Krafka (28 March 1897–6 October 2013). Isobel and Herman lived in Cambridge, Ontario where they raised four children—Richard, Jane, Tim and Peter. Herman lived his final years at Fairview Mennonite Home and then Riverbend Place, both in Cambridge, where he died 14 January 2015. His life was celebrated 24 January 2015 at Wanner Mennonite Church, Cambridge, where he was a member. Herman and Isobel are buried in the Wanner cemetery.

As a young man of 16, Herman was drafted into the German army. Reflecting on his service as a World War II soldier, Neff said, "I was young and carried away like everyone else." Years later he found it difficult to explain to his children and grandchildren how someone, like himself, could lose all judgment and just follow orders. As a soldier, he was wounded and subsequently captured as a prisoner of war in Italy.

By chance, after the war Herman met Harold S. Bender, then dean of Goshen College in Indiana. Bender arranged for Neff and other young Germans to come to study at Goshen College or Bluffton College in the USA. Neff chose Bluffton where he studied business. In 2009 the college awarded Neff, then retired, its Lifetime Service Award for his "service to people, community or church." In retirement, Neff did some teaching at Bluffton and at the University of Waterloo in Ontario.

As a business student, Neff realized that he could start a profitable business in Germany producing and selling potato chips, a snack new to him. After graduation from Bluffton in 1949, he hitchhiked across the USA, visiting factories and learning how to make chips by hand. Back in Germany, while completing a graduate degree in finance and commerce at the University of Munich, Neff made chips in an aunt's basement. Klips Chips were a hit with soldiers in Germany's American-occupied zone.

In 1951, Herman Neff came to Cambridge, Ontario, where he met and was hired as a potato peeler by Mennonite potato chipper Edward Snyder. Neff quickly became Snyder's production manager, initiating novel items such as ketchup chips. (The orange and grape flavors were a "colossal failure!") When General Foods bought Snyder's business in 1959, Neff was named operations manager, company manager six years later, then president of General Foods Canada's Hostess division, and vice-president of General Foods. He also served as president of the Canadian Potato Chip Association. When Neff joined Snyder's in 1951, the company had 30 employees. When he retired 26 years later, General Foods, formerly Snyder's, had a multinational reach with 1,800 staff on the payroll.

In 1978 Neff chose to transfer his business skills to Self Help Crafts Canada (the name was changed to Ten Thousand Villages Canada in 1996), a program sponsored by Mennonite Central Committee designed to provide employment for people in developing countries by marketing international handicraft items for fair prices. Neff travelled the globe, visiting artisans who created the crafts and needed a market. During his 10 years as director of Self Help Crafts based in New Hamburg, Ontario, he oversaw growth of the business from an upstairs factory room to a new building with a large warehouse. He also established the national office there and worked at ensuring that retail stores across the country had enough volunteers.

Herman and Isobel Neff contributed generously to their community in many ways. They touched numerous lives directly and indirectly through their church, including welcoming Laotian refugees into their home and assisting others fleeing southeast Asia in the 1970s. They enjoyed travelling together and took their family on regular trips to Europe, exposing the children to its music, art, and culture. According to son Richard and daughter Jane, he was very much an involved father, and made family his priority.

"My hope was to contribute to the work of the church in an effective and meaningful way," said Neff. He achieved that goal. His Bluffton College award stated, "Inspired by personal faith in God and the ultimate purposes of His kingdom, this individual has made a difference in the lives of others."