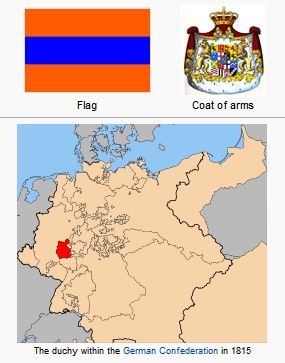 Nassau (area 1,830 sq. mi.) until 1866 was an independent duchy of Germany. Later it became a part of Hesse. As at the close of the Thirty Years' War Mennonites fleeing from Switzerland had been welcomed to rebuild the devastated land of the Palatinate, so a hundred years later they were invited by Nassau to leave the Palatinate and settle in Nassau to raise the productivity of the few fertile sections. The Palatine Mennonites had been conspicuously successful in raising the agricultural level by means of new methods of farming and the use of fertilizers (Correll, 110, 115, 120 f.).

In 1710 the Duchess of Nassau still refused to receive Mennonite refugees from Switzerland, claiming that she was well provided with farmers (Müller, 289). But later regents welcomed farmers who understood the newer methods of agriculture and cattle raising. The Dutch Naamlijst of the years 1766-1802 names Bäntz Jungerich (Güngerich) as the elder of the Swiss Mennonites in Nassau-Siegen; the issue of 1793 names Peter Schanz as the elder of the congregation in Nassau-Weilburg. The great famine of 1770-1772 became the occasion for the invitation given Palatine Mennonites to settle in Nassau. In the late 1770s several families from the region of Heidelberg and Mannheim rented estates in the vicinity of Wiesbaden and Usingen, where there was much wasteland. A leader among these Mennonites was Valentin Dahlem, to whom Baron von Kruse, the head of the government, gave his estate near Wiesbaden in hereditary lease. After the increase in size of the country in 1803 and 1806 the Mennonites were assigned to the task of teaching the peasants. Very soon the ministers of state reported that the Mennonites were a good example to the people, that the cultivation of clover was improving the soil, that more land could be put under profitable cultivation, and that the cattle industry was thriving (Menn. Bl., 1895, 19).

The Mennonites in southern Nassau organized a congregation in 1790 in Wiesbaden. Valentin Dahlem was chosen preacher. He lived at first at Mosbach and later on the Koppensteinerhof near Wiesbaden. In 1830 the congregation was composed of 14 families. Dahlem's influence extended beyond his immediate congregation. He is the author of the first formulary of the South German Mennonites, which was used in the congregations in the Palatinate and Hesse until 1852 and in Baden until 1876.

While the Wiesbaden congregation was coming into being, an Amish settlement was made in the northern and eastern parts of the country. Their members lived scattered over eight districts: Braubach, Dillenburg, Eltville, Idstein, Montabaur, Rennerod, Runkel, and St. Goarshausen. They held their services in the various homes of the members.

About 1830 this congregation had a membership of 130 from 17 families (Menn. Bl., 1896, 36). The family names represented there were Bender, Ehrismann, Hochstätter, Nafziger, Quetsch, Schanz, Schlabach, Spring, Stähly, and Unzicker (Menn. Bl.,1896, 15 and 22). On 21 May 1867 the Amish preachers and elders in Hesse, the Palatinate, Rhenish Prussia, and Nassau met on the Offental estate to change their church regulations. They decided to let each member decide what position they would take on feetwashing, nonresistance, and mixed marriages (Menn. Bl., 1867, 38-40). A part of this congregation immigrated to America, and the others lived so widely scattered that the congregation was dissolved. In 1881 its membership had declined to 25.