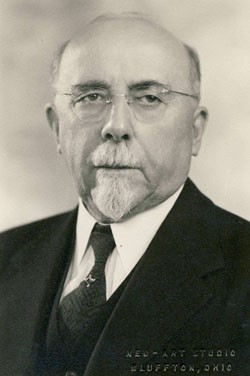 Samuel K. Mosiman: a prominent educator in the General Conference Mennonite Church, president of Bluffton College for 25 years; born near Middleton, Ohio, 17 December 1867, the second of the fourteen children of Christian and Anna Kinsinger Mosiman. His education included one year at the National Normal Institute at Lebanon, Ohio, and further work at Wittenberg Academy and Wittemberg College, Springfield, Ohio, where he received his B.A. in 1897, and M.A. in 1905. McCormick Theological Seminary, Chicago, conferred the B.D. degree upon him in 1905, and Halle University, Germany, the Ph.D. degree for studies in Hebrew, Aramaic, Syriac, and Arabic in 1907. Honorary degrees conferred were Litt.D. from Wittenberg College in 1930 and LL.D. from Bluffton College in 1939. His first wife (1902), Amelia Krehbiel, died in 1905. In 1909 he married Emilie Hamm. There were no children. In 1897-1903 he served as superintendent of the Mennonite Indian Mission school at Cantonment, Oklahoma. The year after returning from Europe he was professor of Greek and philosophy at National Normal Institute. The following year (1909) he started his career at Bluffton College, which then was Central Mennonite College.

For the year 1908-1909 Mosiman served as one of three members on an administration committee of the college. The next year he was elected president, in which capacity he served faithfully and efficiently until 1935. Central Mennonite College, maintained by the Middle District (General Conference), became Bluffton College in 1913, directed by a board of fifteen members representing five branches of Mennonites. The first B.A. degrees were conferred on the class of 1915. During his administration five substantial new buildings were erected, the campus enlarged, the curriculum and faculty greatly expanded, for a period even including a theological seminary.

In addition, especially as a minister of the Gospel, he was active in the First Mennonite Church of Bluffton, of which he was a member, served as secretary and president of the Middle District Conference, vice-president of the General Conference, member of the Federal Council of Churches, chairman of the Association of Ohio College Presidents and Deans, and on numerous boards and committees.

While serving as a missionary to the American Indians Mosiman edited for a short time a periodical, The Cheyenne and Arapaho Sword, in the interest of the Mennonite mission at Cantonment (1900-1901). While at the seminary he submitted a thesis, "The Existence of Maccabean Psalms in the Psalter," for the purpose of obtaining the Nettie F. McCormick Fellowship in Hebrew for 1904-1905. His doctoral dissertation, "Eine Zusammenstellung und Vergleichung der Paralleltexte der Chronik und der alteren Bucher des Alten Testaments," is a recognized piece of research. He also contributed to the International Standard Bible Encyclopedia.