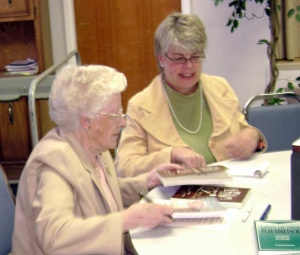 Irene Klassen (left) and Judith Rempel at the launch of Irene's book, Their Mark their Legacy, 2006.

The Mennonite Historical Society of Alberta (MHSA) celebrated it 25th anniversary in 2011. Prior to 1986 it was organized as the Mennonite Historical Society of Saskatchewan and Alberta, but the two provinces had significant differences not only in geographic space but in Mennonite history. Whereas Saskatchewan had the large Hague-Osler and Herbert settlements of Mennonites who migrated from Manitoba, originally coming from Russia in the 1870s, Alberta had just a few of those settlements--in the Didsbury area and at LaCrete. Moreover Alberta had many congregations of the Northwest Conference, of the Swiss Mennonites coming from Ontario, and Saskatchewan had just a few. Furthermore, Mennonites were more densely settled in mid-Saskatchewan, while Alberta Mennonites were scattered from the far north in LaCrete to Coaldale and even farther south.

In July 1986 it was decided to separate as two societies. Henry Goerzen, Harry Stauffer and 14 other interested people gathered in Red Deer at the then Mennonite Brethren Church to check the feasibility of an Alberta-only society. On 1 November 1986 the Mennonite Historical Society of Alberta formally came into being with Henry Goerzen  as chairman, Harry Stauffer Vice Chairman, and Merlin Stauffer Secretary-Treasurer. The purposes were to collect, preserve, catalogue, store and exhibit articles and documents of historical value relating to the Mennonites in the Province of Alberta.

The Society soon realized that a museum of historic artifacts was not feasible, but a Library and Archive was possible. Henry Goerzen had already begun collecting records of the Conference of Mennonites in Alberta, and his basement soon became the official collection space. When that became crowded, a metal grain bin was purchased. Harry Stauffer was also collecting material about and for the Northwest Conference.

MHSA meetings were held twice annually. In an attempt to include all Mennonites communities, they were held in various locations, such as Coaldale, Duchess, Didsbury, and Tofield. We visited a Hutterite colony in Viking and the Holdeman folks at Linden. The Society traveled by bus to the isolated churches in LaCrete. It toured the cemetery in Coaldale and heard the stories of some of the first Mennonite settlers in the area. At various times it focused on story-telling, genealogy, preservation of old records and photographs.

The first Newsletter was published in November 1986. The MHSA Newsletter has continued, with some interruptions, since and by 2011 was published three times annually. Editors have been Henry Goerzen, Irene Klassen, Dave Neufeldt, Peter Penner, Judith Rempel, Dick Neufeld, Lorne Buhr, and Dave Toews, assisted by  Dave Hildebrand. 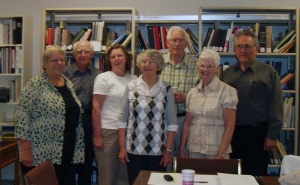 Collecting and preserving Mennonite material has been uppermost in importance to MHSA, but during the 1990s there was a dormant period when very little happened. In 1999, with new technology emerging providing new forms of communication and preserving history, it was evident that the society too, needed to reach into the future. Several people including Peter Penner, retired history professor, and Judith Rempel with an MA in Sociology, picked up the challenge. MHSA acquired permanent space in 2002 in the Mennonite Central Committee building in Calgary. With Judith Rempel as coordinator, a Library and Archives was established. She planned the space that was built to her specifications and with her help. With her computer expertise and love for Mennonite history, an elaborate website was established. The technical side of MHSA has flourished and queries and information has been sent all over Canada, the United States, England, Germany, Russia, and even Japan. Some queries were poorly translated and difficult to answer, but Judith embraced the challenge. In fact it was sometimes difficult to confine her interest to the Mennonites of Alberta, which was the basic mandate of MHSA. With the The Genealogical Registry and Database of Mennonite Ancestry (GRANDMA) program, and Judith’s skills in genealogy and passion for Mennonite history she often connected people with their ancestors. In the Library and Archive donated books and documents have been cataloged and shelved, church records and papers have been categorized, cleaned and stored in  an air conditioned vault and historical records and photos have been scanned and preserved.

With John Bergen as editor, Mennonite Historical Society of Alberta undertook the publishing of the MCC history book, Celebration of Service in 1991.

When Jake Balzer translated the book, Ein Leib viele Glieder by Gerhard Ratzlaff, from German into One Body Many Parts, Judith Rempel typed, formatted and, to Jakes’s surprise, electronically sent  the manuscript to Paraguay for publication in time for the Mennonite World Conference in Asunción.

When MHSA collected the stories of Mennonite leaders who have shaped Alberta, Irene Klassen spearheaded the project. Judith Rempel provided the technical preparation for printing, and Their Mark Their Legacy was published in 2006. Other publications by MHSA were Knowing and Interpreting our Past edited by Judith Rempel, Vauxhall Mennonite Church History by Anne Harder, and Namaka by Henry Goerzen.

MHSA has sponsored several additional book launches: Hard Passage by Arthur Kroeger, Mennonites in Canada by Ted Regehr, Remember us by Ruth Derksen Siemens, and Pushing Through Invisible Barriers by Tena Friesen. These books and others are available at the MHSA office as listed on the website.

Judith Rempel’s sudden passing on 24 May 2011 was a great loss to the Mennonite Historical Society of Alberta, which faced new challenges going into its next quarter century.