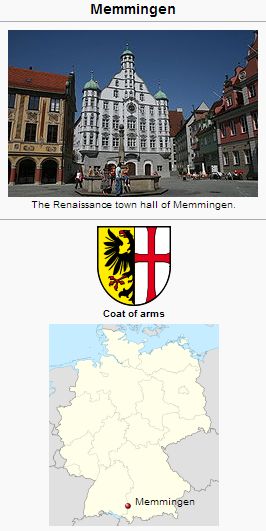 In 1527 a flood of Anabaptists passed from Switzerland to the north and northeast, touching Memmingen, and winning some of its citizens. In January 1528, in the absence of the city preacher Christoph Schappeler, Simprecht Schenk of Wertingen advised the city authorities to expel them rather than to "punish them painfully." Thereupon the council forbade the lodging or sheltering of Anabaptists in its realm. In December of the same year the city council resolved to send all Anabaptists to the preachers, whether native or foreign; those who would not recant should be banished from the city. In case of banishment an eight-day period of grace was given, in hope that the penitent would return to the church. Nevertheless imprisonment was also used, as was reported to Mindelheim in May 1528, in order to instruct them in the Scripture, and if that failed, to detain them. A different case was that of a guild master, who as a member of the council had helped to pass the regulation prohibiting Anabaptists in the city. To the complaint of the city authorities that he nevertheless offered shelter to such persons, he replied that it was brotherly to give shelter to the poor exiles, and that it was better to obey God than man. It is to be assumed that he complied with the order to "put an end to it in eight days."

In 1529 after the second diet of Speyer with its sharp mandate against the Anabaptists, little Memmingen and its sister Protestant cities, led by the Protestant clergy, defied the imperial edict by adhering to its lenient Anabaptist policy. In October 1529 several men and women were instructed in the presence of the council; when there were no results, they were told to "spend their money elsewhere." Others who sympathized with them were punished "with words," and ordered "not to have meetings." Adherents should not baptize, but "we do not forbid other discussion of God's Word."

Through 1530 there was not much stir, but by the end of March 1531 it was decided to call to account those who did not attend church services in order to discover the Anabaptists. A month later one of the preachers proposed that they close the city gates on Sunday and put the citizenry under oath not to shelter Anabaptists. In the process the surprising discovery was made that one or another refused to give the oath "for conscience' sake." Hans Binder "could not be convinced by Scripture that he was in error and would not desist." The banishment was carried out; "they were to leave within a day's time and not return." Early in January 1532 some Anabaptist suspects were cited before the mayor; he ordered them to attend the church services, one of the sermons being on baptism. These measures were apparently successful. Not until 1535 were the Anabaptists mentioned again. In adjacent Woringen, which was under the jurisdiction of Memmingen, there were some who were interested in Anabaptism. It seems there were only women in the group. The council decided in case of arrivals from the outside (there had previously been some additions from Kaufbeuren) to send two preachers and two church wardens to talk with them "at some suitable place, but not before the people." Then there was silence.

The moderate measures of the authorities were sufficient to control the movement. On only two other occasions are they mentioned. In 1574 a forest worker from nearby Eisenberg was tried on a charge of having joined them. His description of the people is of interest not only for church history, but also for cultural history: "They guard themselves against all sins and direct their lives in accord with God's commands, they do violence to no man, they leave the matter with God, they do not swear, they do not drink, they are chaste, and their life is to be to the praise and honor of God, and they have a fine brotherly love among each other; furthermore they are patient in cross and suffering and thank God without ceasing." In 1710 occured the last Anabaptist trace: a Swiss woman came to the city via Ulm, and herself requested the pastor's instruction (Anna Margarete Cramer).