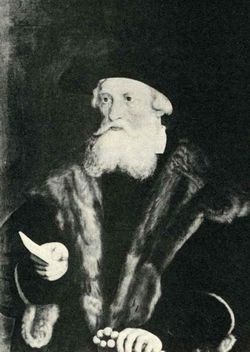 Ludwig was conservative in church matters and not averse to Protestantism. He frequently strove to mediate between religious factions. He did not leave the Catholic Church, in part because four of his brothers were bishops (Ried, 57).

The Anabaptist movement became rather widespread in his realm beginning in 1527. Immediate counter-measures were passed, involving the death penalty. Apparently the elector was opposed to its infliction in matters of faith, as can be inferred from the fact that he asked opinions of jurists at 21 places (Wiswedel, 23).

In 1527 the Palatine chancellor Florenz von Venningen composed a legal document which advocated the death penalty for persons who were baptized on their faith, and which was sent to the juristic faculties of ten universities for criticism (Krebs, 568). Replies rejecting the death penalty did not influence the elector, for he did not wish to irritate the emperor. On 4 January 1528 the notorious mandate of Charles V was published, which ordered the death penalty for Anabaptists. In this connection Ludwig issued a mandate on 5 March 1528 in order, as he stated, "to live out most obediently the command and edict of the Roman Imperial Majesty," forbidding baptism on faith on penalty of death and confiscation of goods, offering high rewards for information on a baptized person (Hege, 58 f.; see Palatinate). The Hutterite chronicles report that 350 Anabaptists were executed under Ludwig V (Beck, 279). Other reports give lower figures. But that they were numerous enough to cause some uneasiness is implied in the opinion of the Nürnberg scholars on the punishment of the Anabaptists dated 29 April 1531 which states that Ludwig "had caused a large number to be sentenced from life to death" (TA Bayern I, 226).

This severe procedure against the Anabaptists brought Ludwig many a reproach (Krebs, 570 and 574). The Hutterite chronicles report that he rued the many executions (Beck, 32). In fact after 1529 there is no record of an Anabaptist execution in the Palatinate. A confirmation of the Hutterite assertion can be seen in his request of 23 March 1529 in the consultations concerning the imperial law against the Anabaptists on 22 April 1529; though he declared himself in agreement with its specifications on punishment, he wished "that only those be punished by death who refused to abstain from Anabaptism" (Ney, 138). The law then specified that those who recanted should be pardoned.