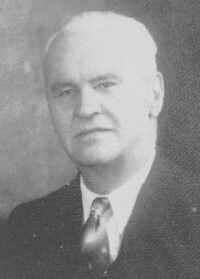 Daniel Loewen (16 September 1872-14 March 1951), an elder of the General Conference Mennonite (GCM) Church, was born at Yazykovo, South Russia. He was the son of Jakob and Maria Klassen Löwen. In 1898 he married Anna Ketler and together they had five daughters and one son.

When Daniel Loewen was 16 years old his family moved to Borissovo in the Bachmut settlement which was the first of at least six pioneering experiences for him. In about 1905 he was ordained to the ministry. In 1910 the family moved to Davlekanovo in the province of Ufa, where Daniel and two bothers owned a thriving mill. After the Revolution following World War I the family moved to the Omsk settlement in Siberia. In 1924 they moved to Canada and settled, at first, on a farm near Harris, Saskatchewan. During his time in Canada Daniel Loewen served as a minister in the Westheim Mennonite Church in Rosemary, Alberta (now the Rosemary Mennonite Church), and as elder of the Hoffnungsfeld Mennonite Church in Rabbit Lake, Saskatchewan from 1936 until he was compelled by his health to resign in 1942. He continued, however, to serve as assistant elder in the Schönwiese Mennonite Church of Manitoba. On 14 March 1951, he died in North Kildonan, Manitoba.