From GAMEO
Revision as of 14:38, 11 April 2020 by SamSteiner (talk | contribs) (wikified table and added categories)
(diff) ← Older revision | Latest revision (diff) | Newer revision → (diff)
Jump to navigation Jump to search
A checked version of this page, approved on 11 April 2020, was based on this revision. 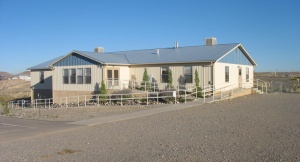 In 1993 Light of Life Mennonite Church, a combined Navajo and Anglo congregation of Mennonites and Brethren in Christ, was established with the support of the Rocky Mountain Mennonite Conference in Farmington, New Mexico, as an outreach ministry to the Navajo people of the Four Corners area in northwestern New Mexico. Ben and Eunice Stoner, licensed by the Brethren in Christ, provided early leadership for the group which began meeting in the Stoner home in 1991. By 1995, when the congregation affiliated with the Rocky Mountain Mennonite Conference, it had an average Sunday attendance of 50-70 and was meeting in a Baptist church facility. On 21 April 1996 the congregation ordained Ben Stoner, George Wero, and Ben Sechrist as pastoral leaders, all three of whom had formerly been licensed by the Brethren in Christ. The congregation purchased land on the west side of Farmington, and a groundbreaking service for a new church building was conducted on 12 March 2000. After occupancy was granted in March 2001, services were moved from the first floor basement to the upstairs sanctuary. The church building was dedicated in June 2001. George Wero was lead pastor, Arnie Miller served as lay leader, and Ben Stoner preached two Sundays a month. The congregation's attendance increased approximately 15 percent in 2001 and 10 percent during the early months of 2002. In 2006 the multicultural congregation became a charter member of the Mountain States Mennonite Conference, and by 2007 the church's attendance averaged 45-50 under the pastoral leadership of Phil Rosenberger and George Wero, both of whom in 2010 continued to serve as the congregation's pastors. Most members were first or second generation Christians with only a few traditional Mennonites.

Unrau, Harlan D. n Pursuit of Land, Health and Mission: A History of Mennonites in the Mountain States Region. Printed in Canada by Blitzprint Inc., 2007.