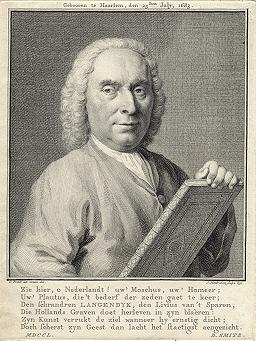 Pieter Langendijk was a Dutch poet. His parents, Arent Pieters van Langedijk and Anneke Luykes Nieuwenhuysen, were Mennonites. He was born 25 July 1683 at Haarlem, died there 9 July 1756. He lost his father early. His mother opened a linen shop, but was unable to give her six-year-old son a proper education. Pieter learned some Latin and French in a school at Amsterdam conducted by a Quaker, but had to leave because of poverty. In The Hague he was employed as a designer in a weaving mill, and in 1722 he moved to Haarlem. On his deathbed he was baptized as a member of the Mennonite church. He acquired fame through his comedies. Besides these Langendijk published Levensloop der Aartsvaders, an illustrated rhymed version of the lives of the Patriarchs (Haarlem, 1740), some poems, Op de Afbeeldingen van Doopsgezinde Leeraars, and a remarkable poem, published in 1713 at Haarlem, entitled Zwitsersche Eenvoudigheid, klaagende over de bedroven zeden veeler Hollandse Doopsgezinden of Weerloze Christenen (Swiss plainness, lamenting the depraved morals of many Dutch Mennonites or defenseless Christians), in which he severely criticizes the worldliness of the Dutch Mennonites, interpreting the ideas of the Swiss Mennonites, who had immigrated to the Netherlands in 1711. With Claas Bruin he wrote Tafereelen der eerste Christenen. Kalff says Langendijk's opposition to ambitious clergymen as shown in his works is due to his Mennonite principles.