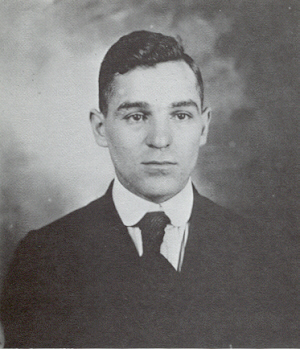 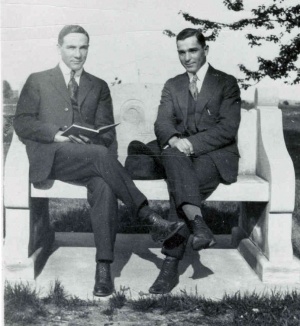 Clayton Kratz was a Mennonite relief worker who gave his life in the service of the Mennonite Central Committee (MCC) in the relief program for the Mennonites of South Russia following World War I. He was born 5 November 1896 at Blooming Glen, Pennsylvania. Kratz was an outstanding student of Goshen College, and was president-elect of the student religious organization (Y.P.C.A.) when he accepted appointment to the first relief team, with Orie O. Miller and Arthur W. Slagel, which was sent out by the newly organized MCC. After arrival at Constantinople 27 September 1920 Miller and Kratz pressed on to the Molotschna settlement in the Ukraine, which was at that time under General Wrangel and the White (anti-communist) Army. After an inspection tour Kratz was left at Halbstadt to set up a headquarters while Miller returned to Sevastopol to arrange for the transport of the supplies which Slagel was to bring from Constantinople. Before the relief program could get started the Red Army overran the Ukraine, forcing Wrangel into precipitous retreat into the Crimea. The Russian Mennonites urged Kratz to flee, but he chose to stay as long as possible, believing that American relief workers as neutrals would be safe. He planned to leave the day before the White Army withdrew from Halbstadt but was trapped by an overnight advance of the Reds, who at first arrested him and then released him upon the pleas of the Mennonite leaders. Two weeks later he was again arrested, having been last seen in Fürstenwerder.

G. A. Peters, who gives the only firsthand account of Kratz's disappearance (Die Hungersnot, 11-16), reports that his endeavors to discover what had happened produced only the information that the Red Commander for Halbstadt had sent him by way of Bachmut to Kharkov, from where he would probably be sent to Moscow and home to the United States by way of Sweden. Peters believes that in view of the manner of his arrest and the attitude of the officials, Kratz was not executed but probably died of some disease before being released.

Endeavors during the following year by A. J. Miller, then director of the Mennonite Central Committee relief program in Russia, to determine what happened to Kratz, which included inquiries in Kharkov and Moscow (Foreign Office), were completely fruitless. He deposited a memorandum on 10 October 1921, on the case, with Foreign Minister Litvinov, and later a similar memorandum with Minister Rakovsky in Kharkov, but neither brought any results. Miller investigated the case thoroughly locally and speculates that the arrest may have been instigated by the highest volost official, Bagon, a Lett who had previously worked in a Halbstadt printing plant. At this time of disorganization it was impossible for the central government officials to properly control the local underlings, many of whom were of a hoodlum type and were a disgrace to the party they pretended to represent, and it is quite possible that the arrest was a purely local blood-lust matter. It is known that Kratz was struck brutally on the occasion of his final arrest.