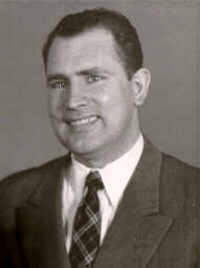 Henry George Krahn (7 July 1923-9 December 1985) was born as his family was en route from the Soviet Union to Canada. He spent his early years in Saskatchewan. Later, his family moved to Abbotsford, British Columbia, where he completed his high school education.

As teacher, historian, and administrator Henry served God within Mennonite Brethren (MB) institutions. After graduation from Mennonite Brethren Bible College and Tabor College he worked with Hispanic people and the Comanche people under the (MB) Board of Foreign Missions. Following further studies in Fresno and the University of Washington, he, together with his wife Alice (nee Bauman) and their three children, served for six years coordinating the Mennonite Brethren missions schools in India.

Upon completing graduate studies in Reformation history at the University of Washington, he taught at Fresno Pacific College (1967-1974). In 1974 he accepted the invitation to become president of the Mennonite Brethren Bible College in Winnipeg. During his eight years as president (he continued teaching at the college until his death) the college grew in enrollment and faculty. Henry was a popular teacher. No student could sit through his courses without being caught up with his infectious zeal for truth. Narrow sectarianism and dogmatic assumptions were foreign to him. He constantly exhibited a rare combination of biblical piety with a fearless openness to new theological concepts.