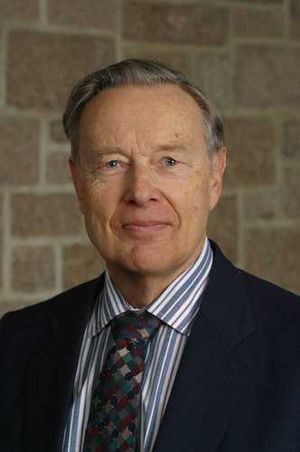 Gordon grew up in Newton, Kansas, where his father, Edmund, was president of Bethel College from 1932 to 1952. Gordon’s college years were interrupted by World War II, when as a conscientious objector he performed alternative service in Civilian Public Service. This experience changed the direction of his life. He had begun college studying mathematics but after the war decided to pursue theology as it seemed much more relevant in face of the crises of the world.

Kaufman earned a B.A. degree from Bethel College in 1947, his M.A. in sociology from Northwestern University in 1948, a B.D. from Yale Divinity School in 1951, and a Ph.D. in philosophical theology from Yale University in 1955. One of his major professors was the renowned theologian H. Richard Niebuhr.

Beginning in 1953, Kaufman taught at Pomona College in Claremont, California. In 1958, he moved to Vanderbilt Divinity School and in 1963 joined the faculty at Harvard Divinity School, where he remained for the rest of his career until he taught his last course in 2009.

Kaufman completed postdoctoral fellowships as a Fulbright Fellow in Tübingen, Germany, 1961–62; a Guggenheim Fellow in Oxford, England, 1969–70; an Association of Theological Schools Fellow in Bangalore, India, 1976–77; a Japan Foundation Fellow in Kyoto, Japan, in the fall of 1983; and a National Endowment for the Humanities Fellow, 1990–91.

Beginning in 1960, Kaufman published a series of important theology books, mostly notable for their brevity and clarity of expression. Each of his books focused on the challenge of sustaining faith convictions in the face of modernity and of embodying those convictions in ways that furthered human wellbeing. His first book, Relativism, Knowledge, and Faith, updated his Yale dissertation, exploring the possibilities for belief in light of the modern world that has challenged so many traditional bases for belief. For a brief time, early in his teaching career, Kaufman pursued the task of creating a doctrinal system following a traditional outline. Eventually, he had decided he needed to ask more radical questions of the theological tradition, focusing on the most fundamental issue of all—how do we understand God?

With the publication of his God the Problem in 1972, Kaufman established himself as a major figure on the cutting edge of academic Christian theology. He distanced himself from standard comfortable ways of thinking about God and proposed that modern Christians must work more seriously at rethinking what they mean when they affirm God’s reality in the actual world in which they live.

Kaufman’s approach asserted that all theology is human work, based on human questions, and pursued through human rationality. He challenged any notion of associating theologizing (including the formation of creeds and confessions) with special divine warrant. In clearing out of the way mystifying notions of authoritarian theological absolutes, Kaufman believed he was creating space then for creative, humanly constructed theology that could serve what he came to call "humanization" – the work of furthering human well-being.

His work reached its culmination in his expansive In Face of Mystery: A Constructive Theology in 1993. This book, a thorough, carefully presented exercise in developing a Christian theology on the bases of modern human experience, won an American Academy of Religion award of excellence in 1995. Kaufman surprised more than a few readers with his conclusions in this book that hold up the model of Jesus and his way of suffering love as the best image of God for sustaining Christian faith and humane living.

A central source for Kaufman’s thought was modern science, and he took evolutionary theory as a key given. He did not make claims for a uniquely Christian hold on the truth, instead arguing that whatever might be truthful for Christian theology must be borne out in fruitful living alongside those of other faiths and no faith.

Kaufman’s final two books, In the Beginning . . . Creativity (2004) and Jesus and Creativity (2006) serve as extended footnotes expanding on the main themes of his 1993 book. He suggests in these books that the term "god" is best understood in terms of "serendipitous creativity" —- not as signifying belief in an all-powerful, person-like being who controls the universe.

Though he spent his career in academic settings far removed from his early Mennonite context, Kaufman remained committed to that tradition. He served on boards of trustees both for Bethel College and Mennonite Biblical Seminary. His on-going interest in Mennonite themes may be seen in his book, Nonresistance and Responsibility: And Other Mennonite Essays as well as in numerous autobiographical essays he published in later recent years. He wrote, "Mennonite convictions go to the deepest levels of my sense of self-identity and have in many ways informed my thinking and behavior throughout my life; I affirm what seems to me to be a basically Mennonite stance in my living and in my work as a Christian theologian."

Kaufman’s concern with the integration of ethics with theological reflection was probably the most distinctively Mennonite element of his theology. He was not a biblicist and he did not spend much time focusing on the Christian community, two central elements of most North American Mennonite theological writing. However, throughout his career he focused on making theology relevant. Kaufman often credited his Mennonite roots for his deep commitments to practical concerns, to issues such as war and nonviolence, the environment, social justice, and inter-religious understanding.

Kaufman’s theology elicited strongly mixed responses from other Mennonite theologians throughout his career. His approaching theology more through science and other academic disciplines than through scripture and the church separated him from most Mennonite thinkers who have been affiliated with church-related schools. He only occasionally spoke or published in Mennonite settings. However, especially after the publication of In Face of Mystery, his work came to be recognized as nonetheless an expression of a Mennonite sensibility that views the life and teaching of Jesus as the core model for embodied Christian faith.

Gordon served as president of both the American Academy of Religion (1871-1982) and the American Theological Society (1979-1980). He taught and lectured widely, not only within the United States, but also internationally, holding numerous visiting professorships and lectureships, including at Chung Chi College, Chinese University of Hong Kong (1991), University of Oxford (1986), University of South Africa, Pretoria (1984), Doshisha University in Kyota, Japan (1983), United Theological College in Bangalore, India (1976–77), and the Institute for Teachers of Systematic Theology, also in Bangalore (1988).

In the early 1950s, Gordon was ordained for the ministry in the General Conference Mennonite Church, an ordination he kept current the rest of his life. He helped found the Mennonite Congregation of Boston in the early 1960s and served several times for a year as the congregation's pastor in their rotating system.

Gordon Kaufman was one of the most prominent American Mennonite theologians of the modern era and a major proponent of theological liberalism. His research, writing, and teachings had a profound influence on constructive and systematic theology.

James, Thomas A. In Face of Reality: The Constructive Theology of Gordon D. Kaufman. Pickwick Publications, 2011.

This article is based on the original English essay that was written for the Mennonitisches Lexikon (MennLex) and has been made available to GAMEO with permission. The German version of this article is available at http://www.mennlex.de/doku.php?id=art:kaufman_gordon_d.