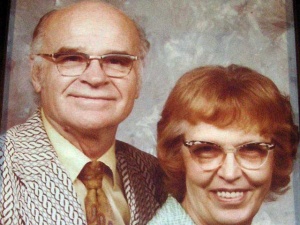 The Kauffman family moved to Cheraw, Colorado when Jess was eight years old. Jess attended school in Cheraw, where he graduated from high school in 1932. He then attended Hesston College and Bible School in Kansas in 1933. He worked three years for the La Junta Tribune in La Junta, Colorado.

In 1934 the East Holbrook Mennonite Church ordained Jess Kauffman as its pastor, three years before he was married. Jess' interest in camping began in 1935 when he took the local Young People's Institute for an outdoor institute at Manitou Springs. In 1941 the family moved to Hesston, Kansas where Jess served as editor of the Hesston Record beginning in 1942. This was soon after Pearl Harbor and the local non-Mennonite population was not happy with a pacifist Mennonite minister editing their newspaper. One night a small mob painted the front of the newspaper office yellow. In 1942 he again attended Hesston College, then led by his cousin Milo Kauffman, for one year. Jess served as pastor of Hesston Mennonite Church from 1944-1949. In 1946 with a local relief committee he helped to build a portable meat canner which traveled to Mennonite farm communities preserving beef to be sent overseas for Mennonite Central Committee (MCC). After several years of operation this canner was turned over to MCC for its use.

In 1950 Jess and Viola and their family moved to Colorado Springs, where in 1951 Jess was the founder of Rocky Mountain Mennonite Camp. He pastored First Mennonite Church until 1956, and was the founding pastor (1956-1958) of Beth-El Mennonite Church in Colorado Springs. In the 1950s and early 1960s Jess worked with camping programs for delinquent youth from the Denver area, and was involved in the formation of the Frontier Boys Camp and Brockhurst Boys Ranch.. During these years various Mennonite groups became more active in promoting camping, and inter-Mennonite cooperation among the various camps emerged. Jess Kauffman served as Secretary of Church Camps from 1955-1961 under the Mennonite Commission for Christian Education. He then took leadership in the formation of the Mennonite Camping Association which formally organized 7 August 1960. During his years of service with the church, he wrote a short booklet, Guideposts to Camp Programming (1958).

The year 1962 brought another move to Camp Friedenswald in Cassapolis, Michigan, where Jess and Viola served until 1973. In 1976 they became directors of Lakewood Retreat Center in Brookville, Florida. Jess "retired" in 1979 near Brooksville, and became a member of the Spring Lake United Methodist Church. He became active in prison ministry during these years, and he authored A Vision and a Legacy: The Story of Mennonite Camping, 1920-1980 for the Mennonite Camping Association.

Jess Kauffman is buried in the Brooksville Cemetery, Brooksville, Florida. His influence in shaping the Mennonite camping programs was profound and continuing.

Warkentin, A. and Melvin Gingerich, compilers. Who's Who Among the Mennonites. North Newton, Kan.: Bethel College, 1943: 133.