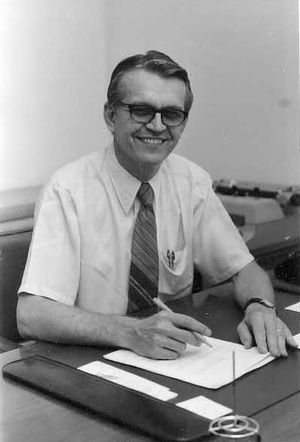 As General Secretary of the GCMC in the 1970s Heinz worked to promote unity in a denomination sharply divided over theological and practical issues. One especially divisive issue was how to respond to GCMC staff members who wanted to refuse to pay federal taxes used for military purposes and who asked the conference to withhold payments to the Internal Revenue Service. In February 1980 the GCMC held a special mid-triennium conference in Rochester, Minnesota to address the tax issue alone. The GCMC eventually decided to disobey the IRS rules and risk federal legal prosecution. It was the only denomination, Mennonite or other, in the country to engage in civil disobedience on this issue. Heinz and Dorothea for 10 years personally withheld partial payment to the Internal Revenue Service.

Heinz Janzen’s leadership was also important as the denomination wrestled with proposals to restructure by separating the United States from Canada. Heinz served on many church boards, including Bethel College, Mennonite Central Committee, and the committee writing the Confession of Faith in a Mennonite Perspective. Heinz and Dorothea also jointly edited and rewrote the General Conference Ministers Manual.

After his time as General Secretary, Heinz and Dorothea served as co-pastors of Trinity Mennonite Church in Hillsboro, Kansas (1980-1990). From 1990-1996 he worked part-time in Newton as coordinator of the Mennonite Men program.