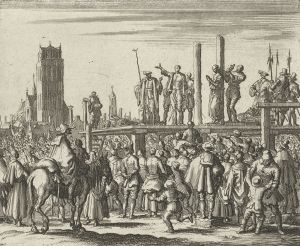 Jan Woutersz van Cuyck, an Anabaptist martyr, burned at the stake on 28 March 1572 at Dordrecht, Dutch province of South Holland, together with Adriaenken Jansdochter van Molenaersgraef. The account of van Braght, Martyrs' Mirror, about these martyrs is very detailed; obviously van Braght, born about 50 years after their execution in the same town of Dordrecht and living there, had at his disposal firsthand information.

Jan Woutersz was an artist, both a painter and etcher of glass. He was born at Dordrecht. Here he was arrested in February 1572; when the sheriff came to his house and asked him whether Jan van Cuyok was living there, he answered, because a Christian should always tell the truth, that he himself was Jan van Cuyck. He was imprisoned at the Vuylpoort. After some trial and torturing, both Adriaenken and Jan were sentenced to death and suffered martyrdom in faith and peace. The Amsterdam Mennonite Library has a rare booklet, Sommige belijdinghen, schriftelijcke Sentbrieven ende Testamenten geschreven door Jan Wouterszoon van Cuyck . . . (1579, n.p., but likely Gillis Rooman at Haarlem published this book). It contains the confession and eleven letters by Jan Woutersz, all found in the Martyrs' Mirror. The letters of Jan Woutersz in the booklet are followed by a letter by Adriaenken and a letter from her husband to her. Finally the volume has two songs, one with a puzzle title "Babel 8 my niet, veel min 8 x"; this means Babel acht mij niet, veel min acht icks (Babel, i.e., the Roman Catholic Church does not respect me; no more do I respect it); the other song begins, "Uut de woestijn roepen wy heer tot dy, die ons in ald' noot staet bi" (From the desert we call, Lord, to Thee, who helpest us in all distress). The author of the second hymn and maybe of both is Jan A. van Dort, Adriaenken's husband. Jan Woutersz' letters are addressed as follows: (1) to his brother-in-law and his sister; (2) to his brother and his sister; (3) to the congregation of Dordrecht; (4) to his wife; (5) to his wife and his daughter; (6) to his only daughter; (7) to his parents; (8) to his sister-in-law, who was still a Catholic; (9) to his three youngest sisters; (10) to his oldest brother-in-law and his sister; (11) to his youngest brother-in-law P. I. These letters are all written in an exquisite style; obviously Jan Woutersz was a man of good education. The letters to his wife and to his little daughter (only seven years old) are very striking; the letters to his brother and sisters, especially to his Catholic sister-in-law, who was a Mother Superior in a convent, are evangelistic, full of Christian love, pressing to conversion. Every letter gives a testimony of a strong, sound Biblical faith. When during the trial the sheriff proposed to Jan Woutersz that he should return to the old Catholic faith and be set free and live with his wife—he had been married only nine years—he replied that he would not recant. Then the sheriff asked him: "Don't you want to live?" and Jan answered: "Sure, I do, but not for anything in the world would I renounce my faith."

Braght, Thieleman J. van. The Bloody Theatre or Martyrs' Mirror of the Defenseless Christians Who Baptized Only upon Confession of Faith and Who Suffered and Died for the Testimony of Jesus Their Saviour . . . to the Year A.D. 1660. Scottdale, PA: Herald Press, 1951: 897-926. Available online at: http://www.homecomers.org/mirror/index.htm.