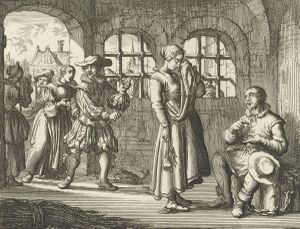 Jacques (Jaques) d'Auchy (Dauchi, Dosie, Doussy), an Anabaptist martyr, was secretly executed on 14 March 1559, in prison at Leeuwarden. He was a merchant who was basely betrayed to the police by a van der Waal at Harlingen. In prison he was visited by his wife, who "would have liked to die with him and inherit the blessed life." He comforted her with the words, "Do not let it dismay you that I must go a little ahead of you; that is the Lord's will." It was revealed in the trial that he was baptized by Leenaert Bouwens in Emden. Nothing else is known of his activities. He was a man of considerable education, unequaled by any other Dutch martyr. Before his conversion he may have been a lawyer. In the discussion with the inquisitor he cites the church fathers Eusebius, Tertullian, and Cyprian. The French language was his mother tongue. His confession was translated from the French into the Dutch language and at least one song he composed was French. So we may assume that northern France or French Flanders was his native country.

Of great importance is his confession, a detailed transcription of his trial by the inquisitors, which he wrote from memory, since it offers an extremely valuable insight into the doctrine and life of the Anabaptists of that period. More than 20 times he was ordered to appear before the inquisitor and again and again the painfully detailed examination about the most important questions of faith was begun anew. Quite surprising is the spiritual su­periority of the Anabaptist over his theologically trained opponents in keen understanding and ex­tensive acquaintance with the Scriptures. He met them most skillfully.

Most of the arguments were about baptism and communion. Adroitly he refuted the arguments for infant baptism with superior Biblical grounds. When, for instance, his opponent pointed out that whole households were baptized and that they probably included small children, he replied that the Bible says nothing of them, but rather states expressly that all the members of the households had heard and believed the word, which could surely not be said of small children. With equally convincing force, and with clever, most fitting Scriptural replies he disputed the bodily presence of Christ in the communion, and rejected the doctrine of the Mass as unBiblical. To the reproach that he rejected the word of the holy Church Fathers, he replied, "I do not reject them, but leave them where they are; for I find enough material in the Word of God for a firm foundation, and enough water of life in the pure fountain, so that I do not need to drink from creeks and pools, which are usually murky and foul." On one occasion he denounced David Joris as "a heretic who destroys the breaking of bread"; i.e., rejects the Lord's Supper.

When asked if he was a follower of Menno Simons' doctrine, he answered, "I believe that Jesus was entirely the Son of God in flesh and spirit; but the question of the origin of His flesh I leave to . . . God; the apostles did not argue about it." His view of the Old Testament is also interesting: it is to be appraised only according to the testimony of Jesus and His apostles. "We are no longer under the law, but under the Gospel." Finally he pointed out the immoral conduct of the bishops and priests, and challenged his opponent to name a single one in the great number who lived a morally clean life, so that he might follow after him. The "heresy master" was now silent, and at length remarked that wicked can also have faith, pointing to Judas and Demas. But the Anabaptist replied aptly, "Then a thief who admonishes his fellows not to steal will also secure results. They would much more prob­ably say, 'If it is evil, why do you do it? You hypo­crite, take the beam from your own eye; then you will be able to see the mote in mine.'" His "Con­fession" is a significant document for the under­standing of Mennonite history.

Jacques d'Auchy also composed a number of songs, at least three of which are known: (a) a song translated from the French into the Dutch and in­cluded by Karel van Mander in his hymnbook De Gulden Harpe, which begins "Tot Leeuwarden op eenen dag"; (b) a song beginning "Ghy Borgers Jerusalem, aensiet," found in the Nieu Liedenboeck of 1562 and later hymnbooks; (c) a song beginning "Och siet hoe droeve dingen," found in the Lietboecxken van den Offer des Heeren (1563 and following editions), No. 24 (Offer, 608-11).

The oldest martyrbook, Het Offer des Heeren of 1562, contains the following by and about Jacques d'Auchy: (1) his confession of faith; (2) accounts written by himself of his confessions made before the commissarius and the inquisitors; (3) a song on his capture, suffering, and death, beginning: "Seer wonderlijck, o Heere, sijn U wercken vermaert." All of these, the song in prose, are found in the later martyrbooks including van Braght, Martyrs' Mirror. Van Braght contributes two accounts on this martyr, once calling him Jaques Dosie and once Jaques d'Auchy. Of Jacques' confession there is also a French edition, titled Confession de Foy . . . (n.p., 1626).

Braght, Thieleman J. van. The Bloody Theatre or Martyrs' Mirror of the Defenseless Christians Who Baptized Only upon Confession of Faith and Who Suffered and Died for the Testimony of Jesus Their Saviour . . . to the Year A.D. 1660. Scottdale, PA: Herald Press, 1951: 498, 591-611. Available online at: http://www.homecomers.org/mirror/index.htm.