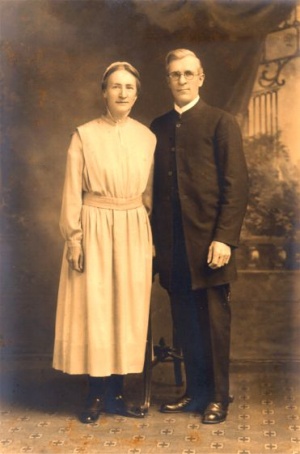 On 15 May 1900 Noah Hunsberger, after being chosen by lot, was ordained as a minister for the David Eby (later Waterloo, then Erb St.) congregation in Waterloo, ON. Later in life he said he had been ordained to preach in the English language at a time when the change from German to English was underway in the Mennonite Conference of Ontario. Hunsberger served as a minister at the Waterloo congregation from 1900-1920 and again from 1923-1929. From 1920-1923 he served at the Sherkston, ON congregation, and continued to serve the Rural Mission Board in a variety of locations after 1930 (e.g., Zurich, Bothwell and Baden -- in the late 1930s). He was actively engaged in pastoral work for forty years. Hunsberger also had in interest in the early work of the House of Friendship during the 1940s. By vocation he had a woodworking shop for some years and also was a beekeeper. During most of his ministry he lived in Waterloo; in later years he lived near Baden and in St. Jacobs.

Noah Hunsberger had only a grade eight education.  He received limited theological training by taking some correspondence courses from the Elkhart Institute (later Goshen College) in Indiana. His lack of education likely influenced his decision to retire in his early 50s as minister of the more urban Waterloo Mennonite Church when younger leaders with more education began to be available. He was described as an "earnest and genuine" preacher, who was often moved to tears while speaking. In his last years he carried on a ministry of hospital visitation. Noah Hunsberger provided quiet leadership, often filling the pulpit in smaller rural congregations, and responding to the call of the conference to serve as an itinerant minister as needed.