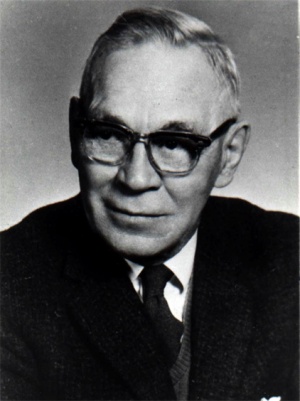 When Paul Hiebert was a child, his father started a store in Altona, where Hiebert grew up, helping in the family store while attending school. He graduated from Wesley College/University of Manitoba with honors in philosophy (gold medal) in 1916 and received his MA in Gothic and Teutonic philology from the University of Toronto in 1917. After graduation, Hiebert tried both journalism and law before deciding to become a medical doctor. To fund the schooling necessary, he began a career in teaching after taking some training, becoming the principal of high schools in Gimli and Ochre River, Manitoba. Meanwhile he began taking the prerequisite courses in science, and was persuaded to pursue a career of teaching at the university level. In 1922 he finished his M.Sc. in physics and chemistry at McGill University, and there in 1924 also received his Ph.D. in chemistry. From that time until his retirement in 1953, he was a professor of chemistry at the University of Manitoba. At that point he and his wife Dorothy moved to Carman, Manitoba, where they lived until his death in 1987. His house on 118 Third Street SW has been designated a Manitoba Municipal Heritage Site (#73).

Hiebert began writing poetry as a child while working in the family store, and continued to write until he was past ninety years of age. In 1947 he published his first and best known work, Sarah Binks, a parody of literary pretensions in the form of a "biography" of the "Sweet Songstress of Saskatchewan." The book, which received the Stephen Leacock Award for humor in 1948, includes deliberately rustic poetry that portrays a naive and humorous perspective on prairie life in the 1920’s, while the book itself is a satire of literary criticism. He also published several autobiographical/philosophical works, Tower in Siloam (1966), Doubting Castle (1976), and Not as the Scribes (1984). Two other works of humor were Willows Revisited (1967) and For the Birds (1980). Dr. Hiebert frequently appeared on radio or television, and published articles in many periodicals. The Paul Hiebert papers, which include his published works, as well as two unpublished manuscripts, correspondence, and many public speeches, photos, published articles and addresses are housed in a collection at the University of Manitoba Libraries Archive.

Dr. Hiebert was President of the Canadian Writers Association (Winnipeg Manitoba Branch) in 1948-49, was a Fellow of the Chemical Institute of Canada, and later became a minister of the United Church of Canada. He was honored with the Good Citizenship Award ( Manitoba) in 1972, and the Order of Canada in 1976. Having made his mark in several widely distinct fields, Hiebert will be remembered for different achievements by different people: as one of Canada’s major humorists, as a teacher who touched the lives of countless leaders in education, as a minister of the Church, as an intellectual, as a public figure, and as a noted university don.