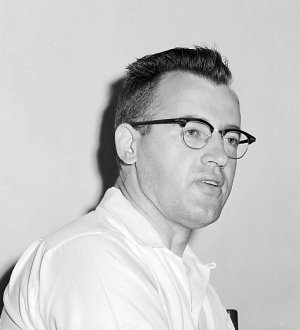 John H. Hess: pastor and urban ministry innovator,  was born 15 August 1922 in the inner city of Lancaster, Pennsylvania, the youngest and fourth child of David Martin Hess (20 September 1885-6 June 1926) and Lydia Ann Buckwalter Hess (17 October 1882-12 November 1978). His father died before John was four. John attended elementary school in Lancaster and one year at Eastern Mennonite School in Virginia before entering Goshen College (BA, 1947), and Goshen College Biblical Seminary, from which he graduated with a Bachelor of Theology degree in 1948. As a member of a touring male quartet, he met Ruth Bechtel (14 July 1924- ) of Hespeler, Ontario. Later, Ruth also enrolled at Goshen College and their courtship led to marriage on 21 August 1948. They became parents of Mary Lou, John, Doreen, and Rhonda; and grandparents of three. John Hess died 19 May 2007.

Following graduation, John worked at Mennonite Central Committee in Akron. He and Ruth connected with many Mennonite young adults who were preparing for alternative service and mission work. In 1949 John and Ruth accepted a call from First Mennonite Church in Kitchener, Ontario to join the pastoral team. John was ordained on 11 September 1949 by C. F. Derstine. At the church John focused on leading young people's programs, but he also worked part time at the Golden Rule Bookstore. He taught on the faculty of the Ontario Mennonite Bible School (1951-1956), served on the Rockway Mennonite School board (1952-1960, chair 1952-1955), and regularly held revival meetings. John and Ruth appreciated the "great support" from the First Mennonite congregation. Tangible evidence of that was the unexpected gift of a new car to replace their "old clunker."

In 1955 John and his family moved to Toronto at the invitation of the Mennonite Mission Board of Ontario. On 3 July 1955 John was inducted as pastor of Warden Park Mennonite Church on Scotia Avenue. At his first Sunday morning service, John's sermon was heard by fewer than five.

John Hess's message emphasized that a loving God accepted all people, and that the Christian's responsibility was to accept of his sojourners in life. That message attracted people from many religious backgrounds (or none at all) to the Warden Park. The small church truly became a community church with many programs for community members, as well as a vibrant Sunday school and Summer Bible school outreach.

In the mid-1960s, the Ontario Government sponsored a housing development of about 2,000 residents that was called Warden Woods. Many calls for help in the new community reached John at the nearby Mennonite Church. With the Mennonite Conference of Ontario's support, the Warden Woods Church and Community Centre was built. The congregation moved from the Scotia Avenue to the new building in 1968. John continued as the pastor, but also took on the responsibility as administrator for the services and programs which the new Centre launched. Hess was honored as Man of the Year in 1970 by the municipality of Scarborough, where Warden Woods was located. Mary Groh, a colleague of John Hess, later wrote: "John Hess's response to this need [at Warden Woods] demanded phenomenal amounts of time and energy and courage."

John and Ruth Hess retired from Warden Woods in 1986 and moved to Kingston, Ontario. John took on part-time responsibilities at the Kingston Mennonite Fellowship and as a chaplain at the Prison for Women. Ruth taught and engaged in quilting at the prison for all of the years they spent in Kingston. Following his surgery for colon cancer, in 1997 John and Ruth moved to Fairview Mennonite Home in Cambridge, Ontario. John's earthly life ended peacefully in 2007; he was buried at the Wanner Mennonite Cemetery. In 2012 Ruth Hess remained a resident at Fairview Mennonite Home.

Groh, Mary I. "Like a Grain pf Mustard Seed"-A History of the Warden Mennonite Church. Toronto, Ontario: The Church, 1977.