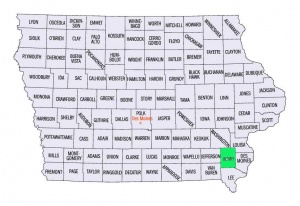 Henry County, Iowa, located in the southeastern part of the state, is bordered by Washington County on the north and Lee County on the south. Its county seat is Mount Pleasant, the site of a state mental institution, where a Civilian Public Service unit served during World War II, and later a unit of I-W alternative service men. 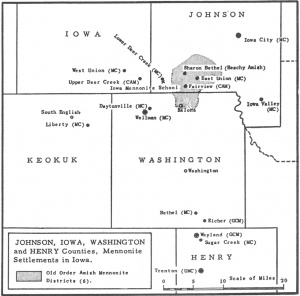 Amish Mennonites first settled in Henry County in the late 1840s, in the northwestern part. By 1860 the following families had settled there: Conrad, Eicher, Roth, Bechler, Rich, Klopfenstein, Goldsmith, Gunden, Christner, Widmer, and Wenger. The first Amish minister in the county was Bishop Joseph Goldsmith who moved there from Lee County, lowa, in 1855, and ministered not only to this settlement but also to the one ten miles (16 kilometers) north in Washington County. Goldsmith had organized a congregation in the Henry-Washington County area in 1852 or 1853. The growth of the two settlements made possible the organization of two congregations in the 1860s, one in Trenton Township, Henry County, and the other in Marion Township, Washington County. Under the leadership of Benjamin Eicher the Marion Township group withdrew from the Amish conference and eventually joined the General Conference Mennonites (GCM). Some members of the Washington County settlement, however, maintained their connections with the Henry County group and when the center of Amish population moved north, the Henry County congregation in 1871 built its first church, Sugar Creek, 1/4 miles (.4 kilometers) southeast of the village that is now called Wayland, and thus north of the original Trenton Township settlement. Prior to 1900 the Eicher (GCM) group began to conduct services in Wayland as well as in their Marion Township church. In 1900 the Wayland group dedicated its first church building and organized a separate congregation. The two Henry County churches had a combined membership of 747 in 1954, Sugar Creek (Mennonite Church) with 462 and Wayland (GCM) with 285, although some members of both groups lived in neighboring Washington County.