How to Write an Article on a Book

An article on a book provides basic factual information in narrative form. Length of article will vary considerably based on the importance of the author and the impact and consequence of the book on the Mennonite community and on those outside the denomination. Thus a book published with a limited audience may be described in 100 words, while a significant work that has lasting impact or controversy may approach 1,000 words. Brevity is best. For questions on style contact an editor or see GAMEO's Style Sheet for Authors.

Elements to be Considered

Structure of the Article

The main features of the article are on the purpose and audience of the book and on the impact the book has had. This may require offering an opinion on the book. If the book was controversial all sides of controversies should be presented. Why was the book written, what is its place in history, did the author have a mission for the book, was the writing of the book authorized by an organization, did the book meet the organization’s expectations, did the book cause the publication of other books, is the book a standard or policy for something, what if anything replaced the book? These are the type of questions that the article should consider.

If there is something significant about the title it should be noted for example if it is very long and the work is frequently noted by a short version, and perhaps a translation into English if the title is not in that language. Special features should also be noted such as, illustrations, dust jackets, number of hymns or poems, special tables, method of printing if unusual. Books from the handprinted age, that is printed before 1840, may have their own special characteristics that could be noted. If the book is rare then the locations of copies should be noted and searching a database like Worldcat, <http://www.worldcat.org/> which is available through libraries, should be helpful. 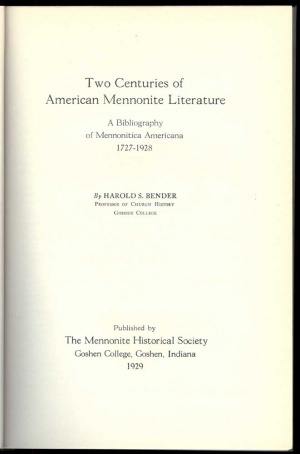 Two Centuries of American Mennonite Literature: A Bibliography of Mennonitica Americana 1727-1928, is an enumerative bibliography listing a little over 1200 monographs and 108 serials. Its purpose is to “list of all the books, pamphlets, and periodicals, including all reprints, by Mennonites in the United States and Canada from the time of first settlement until the end of the year 1928 (Preface).” It sold for $3.00 and only 500 copies were printed.

The original publication of the bibliography was in the pages of the 1927 and 1928 issues of Mennonite Quarterly Review. The organization of the bibliography is first by denomination, "The Mennonite Church," "The General Conference of Mennonites of North America," and "Other Mennonite Groups," then chronological and alphabetical by author. Eight appendixes, author and title indexes follow. There are illustrations of five title pages at the beginning of the book and a key to location symbols of rare books.

In America with its lack of interference by governments in religion and thus the absence of government records on Mennonites which are found in many European jurisdictions the publication output by Mennonites themselves becomes the primary source for Mennonite history. By the 1920s the published output by and on Mennonites was of such an extent that a well organized bibliography was needed and Bender’s Bibliography filled this gap. It was received with enthusiasm by librarians and researchers for it was remarkably free of errors and contained some interesting annotations on some works making the bibliography much more useful than just a list. It encouraged other institutions to develop their Mennonite libraries and spurred others to look for items missed by Bender. The inclusion of several appendixes in which he added items and made corrections indicated that he worked continuously improving the bibliography even as it was in production.

This bibliography has been reproduced in 1981 on microfilm by University Microfilm International of Ann Arbour, Michigan, and a facsimile reprint was published in 2000 by Martino Publishing, of Eastford Connecticut, USA.

Find this item in a library on Worldcat