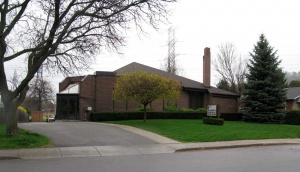 In December 1952 two members of the new Missions Committee of the Conference of United Mennonite Churches of Ontario, C. K. Neufeld and Johann Wichert, explored the possibility of a mission in the the city of Hamilton, Ontario. Gerhard A. and Justina Peters became the mission workers. though they did not have much theological training. The first service was held in the home of Maria Goossen, but in January 1953 a dance hall at 14 Cannon Street was rented. At this time the group was known as the Hamilton United Mennonite Mission. The dance hall proved unsatisfactory within a short period, so a home at 156 Cumberland Avenue was purchased for the mission in summer 1954. Worship space was on the main floor, and the Peters family lived above.

Already in the mid-1950s, because of the urban location, worship changed from German to English, and in 1957 the name changed to Hamilton United Mennonite Church. In 1963 it became known as the Hamilton Mennonite Church. Gerhard Peters suffered some health concerns, and after a second heart attack in 1961, he submitted his resignation. A young graduate of Associated Mennonite Biblical Seminaries, Herman Enns, became the pastor in September 1962.

Herman and Estelle Enns brought fresh energy and vision, and plans for a new church building soon began. The ground breaking occurred on 22 November 1964, and the dedication was held 31 October 1965. The congregation initiated a Voluntary Service unit that developed into the Welcome Inn Community Centre in 1966. Menno and Margaretha Ediger were the first directors of this program, that eventually also became an independent church. Herman Enns also took additional training and initiated a pastoral internship program at Hamilton prior to his sudden death from a heart attack on 6 June 1977.

After considering a move to larger facilities in the late 1980s, the congregation undertook a major building program in 1990-91 to increase Sunday school and worship space, and to make the building more accessible.

Over the years the Hamilton Mennonite Church has continued to be a steady Mennonite presence in the Hamilton metropolitan area, located near major educational and health care facilities.