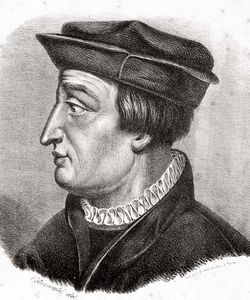 Berchthold Haller (born, 1492, died 25 February 1536), the reformer of the Swiss canton of Bern, was of a gentle disposition, which he also revealed to the Swiss Brethren. He insisted that it was impossible to eradicate error; that should be left to God. Persecution merely increased the following of the Anabaptists. He therefore wanted to grant them religious freedom if they would be quiet, and punish only those who created a public disturbance. To Zwingli he wrote in 1527: "We know, of course, that the council is quite ready to banish the Anabaptists. But it is in our place to judge all things with the sword of the Spirit, either from the pulpit or in conversation." The council, however, disregarded Haller's admonitions and had two Anabaptists drowned in the Aare in 1529 or 1530 (Thudichum, 225). He also took part in the discussion with the baker Hans Pfistermeyer. To Zwingli he wrote that he could not convince himself that it was permissible to punish Anabaptists with the sword, so much the less because they strictly avoided wickedness, whereas so many even of the ruling men were, on the contrary, so indifferent and careless (Müller, Berner Täufer, 24).

Haller states his attitude toward the Anabaptists still more clearly in a letter to Bullinger, 16 November 1534 (see the letter of 12 September 1532). He says that he had been requested by the city of Bern to offer an opinion on the suppression of the Anabaptists. They had expected that he would sponsor the death penalty, but he could not do this. He pointed out to the council the basis of the evil namely, that when many preachers serve their belly more than their duty, it is not surprising that we are called false prophets; when one sees in the magistracy so much pomp, luxury, and greed, and such disregard of the divine Word, the simpler folk are easily persuaded that we have an unchristian government; when false oaths are not punished and offensive cursing is tolerated, it is easy to see why they do violence to the Scripture in forbidding all oaths; when one sees the young people, whose baptism is demanded, growing up in all evil, they can easily decide to reject infant baptism. He had long since proposed that one should not be so quick to shed Anabaptist blood, while the Papists, who do much more harm to the temporal and Christian state, are spared.

Such a gentle and friendly judgment of the Anabaptists and the reasons for the movement was quite extraordinary. Yet Haller was unable to prevent a relatively large number of Anabaptist executions in Bern. His was a yielding temperament, which was almost dominated by Zwingli. One of his great services for the introduction of the Reformation was his participation in the great Bern disputation of 6 to 26 January 1528.