From GAMEO
Revision as of 13:53, 24 July 2016 by SamSteiner (talk | contribs) (→‎Bibliography: added bibliography)
(diff) ← Older revision | Latest revision (diff) | Newer revision → (diff)
Jump to navigation Jump to search
A checked version of this page, approved on 24 July 2016, was based on this revision. 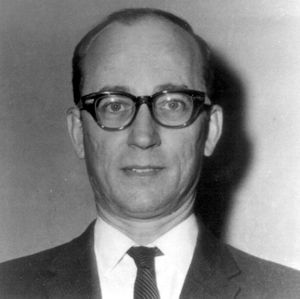 Delbert Leroy Gratz: historian and genealogist of the Swiss Anabaptist-Mennonite immigration to the United States, was born 5 March 1920 on a farm in the Swiss settlement of Bluffton and Pandora, Ohio, USA, son of Harvey Gratz (8 April 1896-2 August 1988) and Fannie (Lauby) Gratz (11 August 1895-18 April 1988). On 6 September 1943 Delbert married Thelma Dailey (1 May 1919-12 January 2012); they had five children. Delbert Gratz died after a brief illness on 24 August 2000 in Bluffton, Ohio. Delbert, Thelma and an infant daughter are buried in the Ebenezer Cemetery in Bluffton.

Gratz attended the public schools of Bluffton and graduated in 1942 from Bluffton College where he majored in history under the tutelage of C. Henry Smith. As a youth he was baptized in the First Mennonite Church of Bluffton, where he was a lifetime member. A conscientious objector during World War Il, Gratz served for three and a half years (1942-1946) in Civilian Public Service. For two of those years he and his wife, Thelma, served with Mennonite Central Committee as relief workers in war-devastated Germany. In Ludwigshafen they directed a school-feeding program for 8,000 children, where one of the recipients was Helmut Kohl, decades later to be the Chancellor of the new unified Germany.

In 1950 Gratz completed two years of doctoral study at the University of Bern that led to a PhD and the publication in 1953 of Bernese Anabaptists. In 1950 he returned to Bluffton College to be librarian of Musselman Library and professor of Mennonite history where he served for 38 years.

From his youth, Delbert Grab was intensely interested in Mennonite and Swiss family history and in the lore of the Swiss settlement where he had lived all of his life. His childhood mentor—educator and storyteller Wilhelm Amstutz—lived on an adjoining farm. In his Bernese Anabaptists Gratz drew upon the studies and research of Ernst Müller, Adolf Fluri, Samuel Geiser and Christian Lerch, integrating the Swiss Mennonite migration story with a wealth of detailed oral history. With his encyclopedic command of the data, he has aided scores of scholars, congregations and families in recovering the strands of this Swiss stream of Anabaptist-Mennonite history. Among his many significant contributions to Mennonite studies and peoplehood identity has been his leadership of more than thirty Mennonite study tours to Switzerland and Europe. In recognition of these contributions to international understanding, Gratz received honors from both the Swiss and German governments, including the Service Cross First Class from the Federal Republic of Germany.

An important contribution in church ministries was his series of unpublicized fraternal visits with Neutäufer (Apostolic Christian Church) congregations in the Balkan countries who were meeting in secret during the postwar years of Communist control.

Delbert Gratz will be remembered as a keeper of the Mennonite memory, attentive helper to many seeking to recover their family's history, a bridge-building in Mennonite peoplehood between Old World and New, one who has rekindled in the hearts of many an affection for their Anabaptist heritage, a dear friend, and a humble disciple of Jesus Christ.