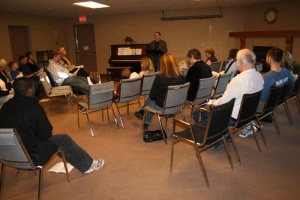 Good News Community Church, a member of the Evangelical Mennonite Conference (EMC), began its services in 2004 as part of a vision by the ministerial of Ridgewood Evangelical Mennonite Church to plant 10 churches in 20 years. On 16 October 2004 people began meeting for prayer and then planning with Ridgewood’s interim pastor Glen Koop. Services began on 5 December 2004 in Ridgewood’s building, but shifted in March 2005 to Steinbach 55 Plus, in the south end of Steinbach, with Glen Koop as the pastor. It averaged 35 to 40 people at the start. Good News Community Church was chartered on 15 May 2005, and the congregation was received into the Evangelical Mennonite Conference on 3 December 2005.

In 2013, Good News Community Church had a Sunday evening service that was held less frequently than weekly and in people's homes. Church people were encouraged to connect with one another, and others, in various ways. With its emphasis on being the "church scattered" in ministry, Good News Community Church was focused on people being "empowered" to use their gifts, rather than on running programs.

Good News met more frequently in small groups than in large ones. It believed Jesus meant it when he said "where two or three are gathered," and it did that multiple times a week. It believed strongly in a circle of influence larger than any membership or original adherents.  Its website was for general readers, allowing for dialogue. In 2013, it was drawing 30-plus new web addresses monthly, which it considered "seeding."

In 2013, Good News attempted to relaunch a teaching, counseling, life coaching service with support and input from the broader community. It believed there was enough pew space in the community and it focused on being neighborly to those who did not attend church.

Curt Reimer was listed as the pastor, but it was described as in name only. He did not lead or pastor the group and had the same responsibilities as anyone else. He and fellow minister Corey Herlevsen were available to perform marriages, funerals, or counseling where needed.

In September 2011 the Good News Community Church announced it was participating in a pilot project where Corey Herlevsen, an adjunct professor at Steinbach Bible College, would serve as a community chaplain.