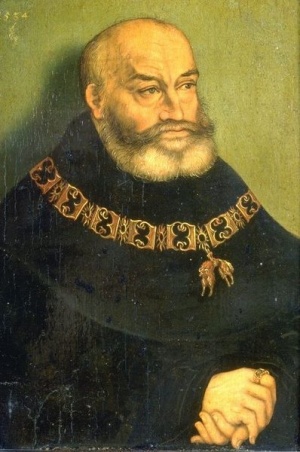 Georg der Bärtige (George the Bearded), Duke of Saxony, 1500-1539, was born 27 August 1471, the son of Albrecht der Beherzte (Albert the Brave), (1443-1500), Duke of Saxony (founder of the Albertine branch of the Wettin family) and Sidonia of Bohemia (1449-1510). In 1500 Georg assumed the reign over the Saxon-Albertine hereditary lands in Germany. He opposed the Reformation. Nevertheless the new doctrine managed to spread in his realm.

He was particularly severe in his measures against the Anabaptists, whom he wished to wipe out. Under the influence of Johann Eck, he was one of the most fanatical opponents of Anabaptism in the era of the Reformation (Gess, 811). On 31 December 1527, he issued a Draconian mandate against "the old, damned heresy of the Anabaptists" (according to Jacobs, 426, reprinted in Codex Augusteus, the great Saxon collection of laws, I, 433 ff., and Wappler, Thüringen, 266). Since death was the penalty for adhering to the doctrine of adult baptism, the Anabaptists avoided publicity, propagating their faith silently (Jacobs, 426). It is supposed that the Anabaptists withdrew in part into the Schwarzburg district of Frankenhausen (Jacobs, 430).

But the movement was not broken in Saxony, as is apparent from the fact that Duke Georg issued a new mandate against the Anabaptists 23 December 1534. It surpasses all previous mandates issued against the Anabaptists in Germany and Austria by its base appeal to the avarice of the populace. Not only the clergy, but also secular officials and all subjects were urged to co-operate in the persecution of the Anabaptists. Anyone who considered infant baptism and the sacraments as naught or expressed himself unfavorably about them, and on the other hand recognized baptism of believers and "similar unchristian ideas" as correct, should be drowned; if there was no suitable water at hand he was to be beheaded; his property should be confiscated. Life and possessions were already lost "if they cannot deny that they have written; seriously about it or taken part in it and not opposed it." Even by recanting they could not save life or property. The entire population was challenged to participate in this religious persecution. Anyone who seems lax in the capture of persons suspected of Anabaptism shall be punished; anyone who on the other hand distinguishes himself shall be rewarded with one third of the property of the condemned one. (Codex Augusteus I, 433-36; Jacobs, 438; Wappler, Thüringen, 383.) This mandate became in part a pattern for the extension of the later imperial laws of 1544 and 1551 against the Anabaptists. Thus no alternative remained for the Anabaptists, in consideration of their relatives and friends, than to seek out infertile regions and live for their faith in solitude; many hid in the depths of the Hohenstein Harz and in the desolate "Schraubishain," also called Schraubenstein, east of Sangerhausen between Riestedt Blanckenhain and Beiernaumburg, where they lived under the open sky and assembled for worship from far and near (Jacobs, 439).

The measures of persecution undertaken by Duke Georg were not limited to his own realm. He was also the moving power in the annihilation of the Anabaptists in the region of Quedlinburg, as well as in the counties of Mansfeld, Schwarzburg, Stolberg, and Hohnstein in the south Harz. Most zealous in the pursuit of Anabaptists was Georg's cousin, Cardinal Albrecht; in Halberstadt he discovered two families in September 1535 (Knobloch and Heune), who had left the forest to avoid the inclement weather because of the expected confinement of the mothers. The statements of the prisoners reveal the high moral standards required of the Anabaptists and their deeply felt religious faith. They died as martyrs to their faith. In the following years further executions followed, which are ascribed to the personal intervention of the duke (Jacobs, 493; Wappler, Inquisition, 91). Even those who would have recanted found no mercy. Anabaptists who had recanted but had again left the Catholic Church had their hands cut off before drowning (Wappler, Thüringen, 161 and 430). The duke "considered the substitution of death by the sword for death by fire as adequate clemency" (Bollinger).

Georg later learned from experience what it means to have one's family dispersed by death. The last years of his life were saddened by the death in rapid succession of his wife Barbara of Poland in 1534 and nine children. For grief he let his beard grow, thus acquiring the epithet "the Bearded." His inheritance, which he had wished to give Ferdinand of Bohemia (later Emperor Ferdinand I of the Holy Roman Empire), went to his brother Heinrich, who introduced the Reformation in the duchy. From now on nothing is heard of Anabaptist executions in the country.

Georg died 17 April 1539 and was succeeded by his younger brother Heinrich IV.