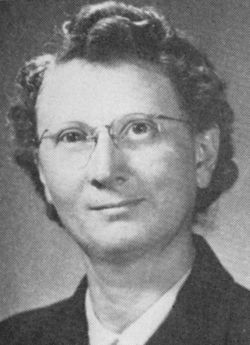 In her childhood, Erna lived with her family in Corn, Oklahoma and began school there. When she was twelve years old, Erna was converted to Christianity. On 13 November 1932, she was baptized and joined the Corn Mennonite Brethren Church. She completed her high school education at the Corn Bible Academy in May 1939 and later continued her education with studies in nursing at the Western Oklahoma State Hospital. Her graduation was on 1 September 1945. During the summer of 1946, she decided to go into missionary work, and she applied to the Mennonite Brethren Board of Foreign Missions in October for service in Africa. She was accepted and began to prepare for the work.

During the academic year of 1946-1947, Erna Funk attended classes at Tabor College in Hillsboro, Kansas. She then spent the next summer and fall studying French at Friends University in Wichita, Kansas. On 2 November 1947, Erna was ordained for missionary service at the Corn Mennonite Brethren Church, and she left New York City on 6 February 1948 for Belgium, where she spent nine months continuing her studies before leaving for Africa.

For the next few years, Funk worked together with several other missionary staff members in Kafumba, Belgian Congo. She was the second registered nurse to join the group, following Mathilda Wall, who had arrived in 1947. The Kafumba station at that time consisted of, among other facilities, a hospital and a clinic, with ten North American mission workers serving in various capacities. Erna worked as a supervisor of the hospital program and was also in charge of the maternity ward. She continued to serve in Kafumba until July 1952 before moving to Matende, where she worked until October 1953. On the 17th of that month, she returned to the United States for her first furlough and later went back to Africa to continue her work there.

Altogether, Erna Funk served in Africa for about nine years, from 1951 to 1960. On her retirement, she settled in Corn, Oklahoma, where she had grown up and several of her family members still lived. She became involved in the Corn Mennonite Brethren Church, where she was a member. Erna continued to serve in various capacities until she was no longer able to do so, and she died on 19 April 2000 in Corn.

Esther Erna Funk was a dedicated missionary who used her skills to benefit the people of the Congo and her home community. Her commitment to the church and to the mission field was an example to her family and to all of the people she encountered.