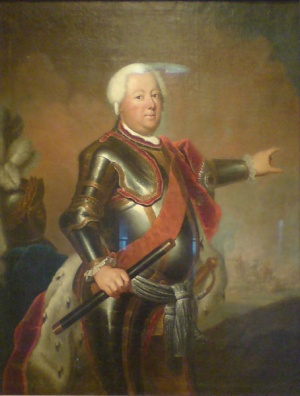 Friedrich Wilhelm I (Frederick William), known as the der Soldatenkönig (Soldier King), King in Prussia (König in Preußen), 1713-1740, was born 14 August 1688. He was the son of Friedrich I, King in Prussia and Sophia Charlotte of Hannover (1668-1705). Friedrich Wilhelm was a very able administrator and did much to improve Prussia, including civil service reforms, the establishment of primary schools, and the resettlement of East Prussia after it had been devastated by the plague in 1709. He also enhanced the international reputation of the Prussian military. In short, what Prussia owes this economical and stern ruler lives on in history. In terms of his religious life, Friedrich Wilhelm was a devout Calvinist.

Toward the Mennonites Friedrich Wilhelm was at first benevolent, but later became rather ungracious. Like his fathers he had promised them freedom of worship, their own church buildings, release from conscription even for their servants, and even in 1721 he again issued an invitation to the Mennonite families living in Polish Prussia along the Vistula to settle in his domain. But his partiality toward the "Potsdam guards," for which he needed tall men, led him into injustice. His recruiting agents, who did not hesitate to use force when they saw strong young men six feet in height, also came to East Prussia, and during the night of 14 September 1723, they dragged a number of young Mennonites off to Königsberg, and tried to make them consent to accept military service by starving them. The Mennonite congregation complained to the king, and the perpetrators of the violent deed were punished. Yet the king was not willing to release all these tall men. He had the six stateliest brought to Potsdam and put under severe discipline. But when all threats and mistreatment failed to weaken the young men in their refusal to take service, he dismissed them, but kept a personal grudge against the Mennonites, who had told him they would emigrate if their freedom from conscription was not granted.

In his first flush of anger he ordered all the Mennonites to leave the country, and some families actually returned to Polish Prussia (see Dannenberg). Only in Königsberg and near Tilsit did some Mennonites remain, protected by the civil authorities for their capability. Again on 22 February 1732, the king issued an order that all Mennonites leave the country within three months. However, the Royal Ministry of War and Crown Lands declared that the tax funds would be appreciably lowered by this measure, for the Mennonites contributed to the royal treasury both as industrialists and as farmers. In addition, these people had been lured into the country precisely by the promise of freedom from military service, and their numbers were so small that their refusal to do this service could not injure the state in any way. Friedrich Wilhelm rescinded his order of banishment on the condition that they establish weaving mills.

In another part of his realm, at Krefeld, Friedrich Wilhelm I throughout his reign showed the same kind attitude toward the Mennonites. In 1721 he granted them a Privilegium permitting the practice of nonresistance in return for a fee, and in 1738 he even paid them a rather cordial visit.

Friedrich Wilhelm died 31 May 1740 and was succeeded by his son Friedrich II.