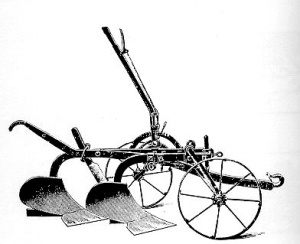 Farm Machinery used by the Mennonites is usually the same as that used in their surrounding communities. Certain conditions have caused some exceptions. As pioneers in less civilized countries, the Mennonites found frequently that no farm machinery was available or that which was available was inferior in quality to what they had been used to in the country they came from. Thus they were compelled to continue making traditional and creating new machinery for the land they were tilling, This was the case particularly in Russia, where they had an exceptional opportunity to invent and develop the agricultural machinery they needed. To some extent, this was again the case in Paraguay.

When the Mennonites settled in the steppes of Ukraine at the end of the 18th century, they found only nomadic neighbors and possibly a few Russian peasants tilling the soil with wooden plows and harvesting their crops with a sickle and flail. They soon found the machinery they had brought with them inadequate for the large-scale farming in the Ukraine. Markets for better agricultural machinery were hardly accessible to them. Thus they were compelled to repair and replace their old machinery in their own smithshops, some of which gradually developed into factories for producing machinery more suitable and practical in the new environment.

One of the first implements thus invented was a multiple-share plow known as the "bukker," which appeared on the market before 1850 (Rempel, 248). The first bukkers were made with three or four plowshares. Later five-, six-, and seven-share bukkers became common. The single-share plow with the furrow of about 10 inches in width was, in many cases, replaced by a bukker plowing up to 36 inches and more. Later, about 1880 (Rempel, 251), this bukker was developed into a drill-bukker, a broadcast sower with a seeding box placed on the top of the plow dropping the seed into the open furrow.

The second advance enabling the Mennonites to farm on a much larger scale was the reaper which became known as the "lobogreika" (this Russian word means "brow-sweater"), invented and manufactured by Peter H. Lepp, Chortitza, during the 1860s. The lobogreika spread very rapidly in the Mennonite settlements during the 1870s and 1880s, enabling two men, one as driver and another throwing off the grain in sheaves, to reap from 15 to 18 acres a day, whereas formerly they had reaped only 5 acres by hand. Because of the rapid spread of the lobogreika among the Russian population, this reaper was manufactured by a great number of Mennonite factories such as Koop, Hildebrandt, Neufeld, Klassen, Niebuhr, and Franz and Schröder. It was even produced by the International Harvester Company in Russia. With the coming of the binders at the beginning of the 20th century, the lobogreika was gradually replaced in Mennonite communities, and some Mennonite manufacturers changed to the production of binders. The first binder produced by Mennonites in Russia came from the factory of A. J. Koop in 1914. However, World War I and the following revolution and nationalization of all factories prevented the development and large-scale manufacturing of the binder among the Mennonites.

Although the tilling and harvesting machinery had been improved by the end of the century and was manufactured in large quantities, threshing was still primitive. The Mennonites were using a horsedrawn stone roller, running it over the grain on the threshing floor. These threshing stones, with grooves cut lengthwise along the outside, were transplanted to the prairie states and provinces and used in pioneer days (the threshing stone is the emblem of Bethel College, North Newton, Kansas, USA). By the end of the century, they were gradually being replaced in Russia by horsepower threshers or, on the larger estates, by motor and steam threshers of English and German make. Mennonite manufacturers produced threshing machines on a large scale, not only for their own communities but also for the Russian population.

Various types of wagons were produced in Russia beginning in the middle of the 19th century. The common wagon with steel axles and a wooden box used on the farm became popular far beyond the Mennonite settlements. Spring wagons produced in Mennonite factories were also used by almost all Mennonite farmers. Some of these wagons found their way to the prairie states and provinces of North America, but were soon discarded. One is found in the Tabor College museum, Hillsboro, Kansas.

In quality the Mennonite agricultural machinery was far above most of the Russian-produced implements. Some of the larger factories, employing 300 and more workers, were Hildebrandt and Sons, A. J. Koop, Lepp and Wallmann, J. G. Niebuhr, Franz and Schröder, and J. M. Janzen. In addition to these, a great number of small factories and shops could be found in most of the Mennonite settlements. The eight larger Mennonite factories alone produced nearly one tenth of the total Russian output of agricultural machinery, with a total output of 3,162,632 rubles with 1,744 workers in 1911. The largest factories were located in Chortitza, Alexandrovsk, and in some of the Molotschna villages.