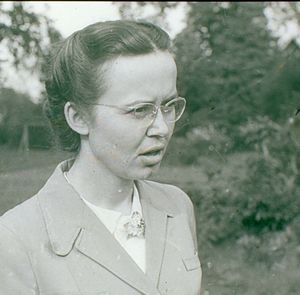 Elma Elisabeth Esau was born 14 September 1917 to Edward and Clara (Claassen) Esau near Whitewater, Kansas, USA. She was the second child and eldest daughter in a family of four sons and two daughters. Elma grew up on the family farm; she never married. Elma Esau died on 16 November 2009.

Elma graduated from Whitewater High School in 1935 and attended Bethel College for two years. She returned to Bethel and completed her BA degree in 1969. Prior to World War II she was a school teacher for two years in Logan County and two years in the Whitewater community. From 1943 to 1981 she volunteered and then worked for Mennonite Central Committee (MCC) and its subsidiary, Menno Travel Service (MTS).

Elma Esau began her MCC service at the Ypsilanti, Michigan, relief training unit in 1943. She then worked to set up and manage relief clothing centers in Ephrata, Pennsylvania; Kitchener, Ontario; and Newton, Kansas. In April, 1945 she went to the MCC Center in London, England, and from there on to serve in Amsterdam and Copenhagen. In the summer of 1947 she traveled around the USA speaking to women’s groups at Mennonite churches about MCC’s relief work in Europe, and then she remained at Akron until April 1949, when she went to Gronau, Germany, for additional relief service.

In 1951 she escorted Mennonite refugees to Brazil and Uruguay. After two years in the MCC Personnel Office in Akron, she began her work for Menno Travel Service in Newton in 1953 and continued there until 1958. In 1959 she ran the MTS office in Amsterdam. From 1962 through 1965 she directed the MTS office in Beirut, returning from mid-1966 to 1967, when the office was evacuated during the Six Day War. She worked in numerous other locations for brief terms before returning to the MTS Akron office from 1969 to 1980, where she directed the tour department and lead many tours. She retired to her family farm near Whitewater in 1981 and moved to Kidron-Bethel in 1991. She was a lifelong member of the Emmaus Mennonite Church.

Elma Esau traveled in more than 70 countries, was an artist, photographer, painter, woodworker, author, translator, historian, lifelong student and teacher, storyteller, independent woman, advocate for all refugees and for peace in the Middle East, and had a special love for Lebanon.