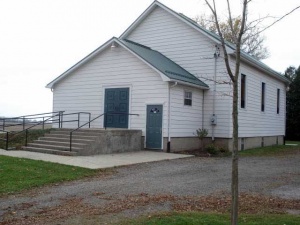 Erie View United Mennonite Church is a small rural church located in southern Ontario in the county of Norfolk. It was established by a group of Mennonites from Russia in 1926. Among early members were the Jacob and Maria Reimer family who had come with other immigrant families by train to Selkirk, Ontario where they worked for a Hoover family. Hoovers also owned farmland in the Port Rowan area and the Reimer family went there in March 1926 to farm. The Henry Petker family joined the Reimers and soon other families followed – Gerhard Derksen, David Neuman, Bernard Konrad, Johann Kornies, Aaron Doerksen, Johann Baese, Alex Suderman, Peter Teigroeb, Henry Hiebert, Jacob Wiens. At first they met for worship in each other’s homes. For Christmas 1926, the group met in the Erie View Baptist Church. Later, in 1940, the United Mennonite group made its home in this building. In early 1927, the Mennonites began meeting in the rented Messiah Church building. Members of both General Conference Mennonite and Mennonite Brethren affiliation met jointly and were ministered to by leaders of both denominations. Dietrich Doerksen was an early MB minister and Jacob Epp came from the General Conference church. Baptisms and church membership were held separately. The General Conference group was affiliated with the Waterloo-Kitchener congregation.

In 1940, the MB and GC churches went separate ways. The General Conference group bought the unused Baptist church one km south of their former meeting place and functioned until 1947 under the charter of the Vineland United Mennonite Church. In 1947 the church received official recognition by the government as the United Mennonite Church of Erie View. Peter Pankratz, William Hamm, and Cornelius Penner were the representatives of the church. Some families from Reesor, Ontario joined the Port Rowan group about this time. From 1940-1947, John J. Reimer gave the message on alternating Sundays, a minister from Vineland would come once a month and Jacob Petker filled in empty slots. 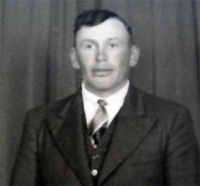 Other church leaders at Erie View were Jacob Braun, 1947-1959, then John J. Reimer for another 6 years. Gerhard Peters began half time in 1965, the first minister with a salary. He preached English sermons, alternately with German spoken by Jacob Petker. Gerhard Peters then served full time 1972-1976. Jacob Petker served again for 6 years after Rev. Peters retired with pulpit assistance from Vineland, Waterloo and Leamington. Later pastors (see table) provided leadership on a 2/3 time basis with local lay speakers or guest ministers filling the pulpit.

Leadership style has been traditional with emphasis on the church liturgical calendar and often following the lectionary. From the beginning, singing in 4-part harmony with at least one adult choir was an important aspect of church life. Even by 2004 a small choral group with members of several generations existed to edify worship. Two ladies groups existed making quilts and generally promoting the work of missions and MCC. Sunday school teaching has also been a priority. John Wiebe was a long serving superintendent. Youth ministry has been emphasized as well as an evening children’s program during the 1980’s and early 1990’s.