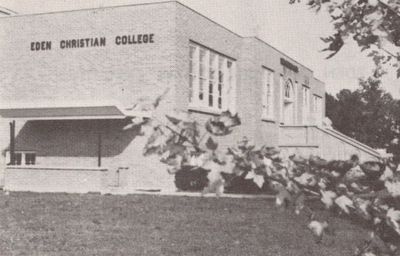 In 1945 the Virgil Bible School Society decided to add a high school department. Henry B. Tiessen was called to teach Grades 9 and 10 to 36 students in the crowded homestead where the Bible School also conducted classes.

In November 1946, Henry J. Dueck, chairman of the Eden Board, and Henry B. Tiessen went to Toronto and obtained accreditation for Eden with the Ontario Department of Education.

In 1946 the Society decided to construct a new high school building. They borrowed $25,000 from the Dominion Bank, and $16,000 from Waterloo Trust. Many volunteers helped to clear the bush near the Stone Road, several hundred yards from the Bible School building. Under the direction of Jacob Bartels, the building was completed in the spring of 1947. It contained four classrooms, an office, a chapel and library on the main floor, and a science lab and games room in the basement.

In September 1947, four teachers and 70 students in Grades 9-12 began the school year in a new building. Art Harder joined the staff as math. and science teacher. The first 12 graduates of Eden received their diplomas in June 1948. The Ontario Mennonite Brethren Conference assumed responsibility for both Eden Bible and High School that year. The building debt of $45,000 was paid off by the churches within two years.

In 1948, Rev. and Mrs. Isaak Loewen were hired as caretakers and as house parents for the dorm students. The latter were accommodated in the upstairs and rear section of the Bible school building, as well as in a renovated building behind the brick homestead. Students came from as far away as Leamington, Port Rowan, Kitchener and Vineland.

From 1970 to 1975, Eden experienced another period of rapid growth. From an enrollment in the early 1970s of 280 with 71% coming from Mennonite Brethren homes, 18% from United Mennonite families, and 11% from other denominations, it sky-rocketed to reach 329 in 1975. The board proceeded to enlarge the school once again. A larger gymnasium equipped with shower rooms, exercise room, and a large foyer was added. The debt of $314,000 was paid off within five years. The estimated replacement value of the buildings on the Eden property was $1,335,000.

During the 1960s the average dorm population was around 20, and reached 37 in the 1970s. Most students went home for the weekends. Herman and Irene Kroeker, John and Nelly Klassen, Nick and Katharina Wiebe, Peter and Molly Froese and others served as house parents.

Starting in 1976, Eden's enrollment began to fall slowly. By 1987, fewer than 200 students attended the school. Several factors contributed to this decline, including smaller families, economic uncertainty, rising tuition fees, and limited program offerings. Faced with the ever increasing costs of operating the school, the Conference commissioned a study of several options for reducing Eden’s financial burden. When the Lincoln County Board of Education was approached, its Director Gerry Holmes responded positively to the idea of incorporating Eden into the Lincoln system. Thus Eden Christian College joined the Lincoln County Board, first as a pilot project in 1987, and then, in 1988, as an alternative secondary school in accordance with provincial regulations. Provision was made in this arrangement for preserving the school’s distinctiveness by granting a space for the Spiritual Life Department which became the Spiritual Life Centre in 2013.

The school operated in the original building in Niagara-on-the-Lake until the end of June 1995. Eden High School then moved to St. Catharines and for 5 years was located in the former Scottlea School at 497 Scott Street. These facilities provided many challenges for staff and students, especially when there was no on-site gymnasium and very limited technological facilities. The size of the school also limited the number of students who could attend and the waiting list grew annually.

In September 2000, Eden High School moved again, this time to share a building with Lakeport Secondary School at 535 Lake Street in St. Catharines. By 2000 the enrollment had climbed to 507 students with 30% coming from Mennonite Brethren homes. By 2011 Eden High School served over 850 students annually. Lakeport Secondary School closed in June 2011 and Eden became the sole occupant of the facilities of the school in 2012.

The Ontario Mennonite Brethren Conference funded the Spiritual Life Department from 1988-1998 had elected representatives to serve on an Eden Advisory Board and an Eden-Lincoln Liaison Committee. With the amalgamation of the Lincoln Board of Education with the South Niagara Board of Education, forming the District School Board of Niagara (DSBN) in January 1998, the Eden-Lincoln Liaison Committee was discontinued. The model of operating Eden High school as a public school "with a difference" was maintained.

The principals at Eden during the period when the school was totally administered by the Ontario Mennonite Brethren Conference were Henry Tiessen, David Neumann, Rudy Bartel, George Wichert and Ray Ratzlaff. Rudy Bartel was principal during the transition to becoming an alternative school within the public school system and Keith Vrieszwyk and Ray Smith were the first vice-principal and principal appointed by the Lincoln Board of Education.

The original Eden Christian College property in Niagara-on-the-Lake was sold by the Ontario Mennonite Brethren Conference in 1997 for 1.3 million dollars. In the year 2000, the Conference approved a grant to the DSBN in an amount not to exceed $704,000 from its capital fund toward the expansion of a cafeteria and a chapel at the Lakeport Secondary School, a project that was completed by September 2001.