From GAMEO
Revision as of 15:29, 12 January 2023 by AlfRedekopp (talk | contribs)
(diff) ← Older revision | Latest revision (diff) | Newer revision → (diff)
Jump to navigation Jump to search
A checked version of this page, approved on 12 January 2023, was based on this revision. 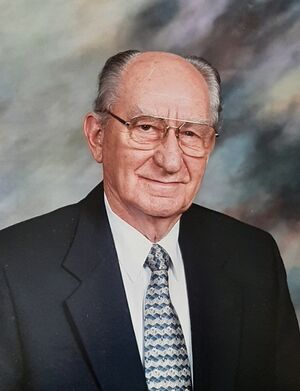 Nick liked to tell the story of how his life was an answer to the prayer of his parents, who dedicated him to the Lord for survival and service during a severe famine in Ukraine that took the lives of many Ukraine family members. Nick believed that his conversion and baptism in his youth and later ordination for ministry confirmed his special purpose.

In 1923, the Dyck family immigrated to Canada from Ukraine, first to Saskatchewan and then to the Fraser Valley in British Columbia. Nick started his adult life as a farmer, but while attending Yarrow’s Elim Bible School in 1954-55, he soon realized that the Lord was calling him to a pastoral outreach ministry. This involved starting the McConnell Creek Church in 1956 near Mission, British Columbia, where for six years he tested various church growth principles. Next, he graduated from Northwest Baptist Theological College in Burnaby and then accepted the invitation to pastor Central Heights Church in Abbotsford, doing so for the next 11 years. Under Nick’s leadership the church became known across Canada as a model flagship outreach community church.

Nick Dyck was a trailblazer with a heart for outreach. He was influenced by the church growth and charismatic movements, as well as many other outreach involvements that helped make his ministry fruitful and effective. He had a vision to reach the community and to remove the ethnic barriers between the church and society at large. Nick was known for breaking the Mennonite Brethren Church out of its homogeneous Mennonite culture. He also championed the worship language change from German to English and renamed church plants from "mission churches" to "community churches." Nick aggressively pursued evangelism as the church’s first goal.

Nick is credited for starting the BC church planting era in the 1960s and onward. During his 14 years as the BC Church Extension Director, 32 new churches were added to the BC MB Conference. His successors Jake Balzer and James Nikkel continued Nick’s focus and planted more than 30 churches each during this era. There was a climate for growth in BC during the second half of the twentieth century which resulted in many church plants and the emergence of a multicultural MB Conference, mostly due to Nick Dyck’s inspirational and visionary leadership. He was a deeply spiritual leader and was known as a man of prayer and evangelism.

Nick was known as a leader of church growth and expected each church to have an outreach plan. Provincially, his plan was that the number of churches should double in a decade. Nick was also a conference leader. As the chair of the Canadian Conference of MB Churches Board of Evangelism, he helped establish several of the first Quebec MB churches and participated in the launch of the Quebec Mennonite Brethren Bible School (École de théologie évangélique du Québec). While Nick’s outreach focus was church planting with adults, he also helped start the Columbia Bible Camp (later renamed Stillwood Camp & Conference Centre) where he was the first camp director.

Nick and Betty’s retirement was an extension of their ministry. Nick became a travelling church planting consultant to Alberta and Ontario Mennonite Brethren Conferences and also to some US Churches. Nick also worked as an associate in the Canadian Conference evangelism ministry. It was also during these years that Nick and Betty worked with Peter Loewen in Church Partnership Evangelism (CPE), renamed Disciple Making International (DMI), which involved fourteen CPE trips to Ukraine, as well as to other countries, resulting in hundreds of people responding to the gospel.

Nicholas John Dyck was honored to be included in Harold Jantz’s book, Leaders Who Shaped Us, published by Kindred Productions in 2010. Nick was listed as one of the top twenty-five Canadian MB Conference leaders from the past one hundred years who helped shape the Mennonite Brethren Church in Canada to be more outreach-focused.