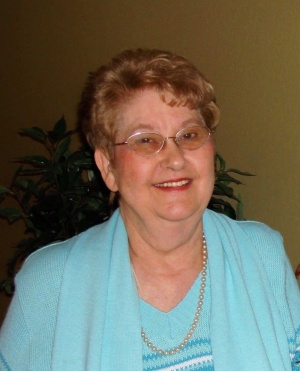 Gertrude grew up on a rural farm in the Swift Current area of Saskatchewan. Her parents were from a Mennonite background. Gertrude became a committed Christian at the age of twelve. She received her first nine grades in a one-room, one-teacher school, and attended high school in Swift Current and Prairie High School in Three Hills, Alberta. Gertrude attended Prairie Bible Institute in 1957 followed by nurses training at Calgary General Hospital in preparation for missionary service.

In 1962, at 28 years of age, Gertrude went to Trucial Oman (it became the United Arab Emirates in 1971) with The Evangelical Alliance Mission (TEAM). She was one of the first foreigners to work as a nurse in the oasis of Al Ain. She was nicknamed by the local Arabs as "Doctora Latifa," meaning "mercy." Gertrude acted as a midwife to many of the 90,000 babies born at the Oasis Hospital in Al Ain after it opened in 1960. The United Arab Emiraties (UAE) newspapers referred to her as the "beloved 'mother' of thousands."

Gertrude had a long standing association with HH Sheikh Zayed II bin Sultan Al Nahyan, the founder and president of the UAE and ruler of Abu Dhabi, and delivered almost a hundred children in his extended family as well as children of Bedouins and ordinary citizens. She was also involved in visiting local Emirati and royal homes and took many opportunities to share her faith and love with the people there. They became very dear to her heart.

Dyck retired from active nursing in 1988 but continued to work at Oasis Hospital as part of its cultural orientation team until 2000, and was later invited to work for InterHealth Canada for one and a half years as Cultural Advisor in Abu Dhabi.

One of Gertrude’s biggest contributions to Oasis Hospital is the photographs she took. The pictures she took of her life, her friends, and Oasis Hospital's growth and development serve as an historical archive of the rapid changes the UAE has seen in the last 40 years.

Gertrude retired from active ministry in 2005 and relocated to Abbotsford, BC. It was a difficult transition after living 38 years in the Middle East. She lived at Hallmark Assisted Living before moving to Menno Terrace East. She watched the Clearbrook Mennonite Brethren Church Sunday services regularly and felt this was her church until her passing.

Gertrude’s memoirs were published by Motivate Publishing, a major UAE publishing house in 1995. In 2002, Gertrude was recognized with two of Canada’s highest honors: the Order of Canada, and a Queen Elizabeth II Golden Jubilee Medal for her work in the UAE. Gertrude was also posthumously honored in the UAE with the Medal of Independence of the Third Order.